Jim Geraghty says that Hillary Clinton is a serial liar:

We know she lies when she’s cornered. Running from snipers in the Balkans, being “dead broke” upon leaving the White House, “all my grandparents” immigrated to America, her tale of trying to join the Marines, her claim she never received or sent any material that was classified on her 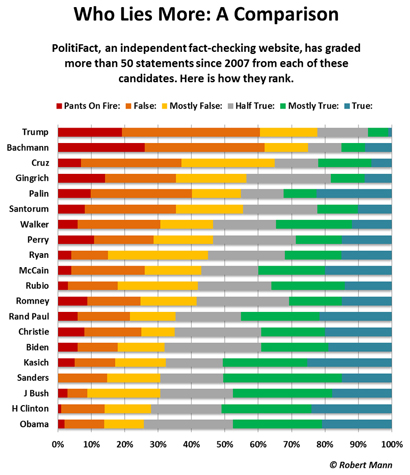 Seriously, Jim? I’ll give you the Balkans thing. That was a lie. But the others aren’t. The Clintons were in debt when they left the White House. Hillary’s great-grandparents were immigrants—she was off by a generation. Nobody knows if she ever tried to join the Marines, but there’s no evidence she didn’t. She didn’t knowingly send classified material on her private email system, and it’s hardly fair to judge her by the fact that some of her emails were retroactively classified. And her statement about the Iraq War was strained (she was talking about criticism after Obama joined the Senate), but it’s typical political exaggeration, not a lie.

Look: all politicians lie sometimes. That includes Hillary Clinton. But as the chart on the right shows, Hillary is one of the most honest politicians on the national stage. Here’s a similar conclusion from the New York Times.

I know it’s in their partisan self interest for conservatives to insist that Hillary is the world’s biggest liar. But she isn’t. Not by a long, long way. Republicans need to get the beam out of their own eye before they keep banging on about the mote in Hillary’s.