Was I too hard on Bernie Sanders yesterday? Maybe! I mentioned that although he hadn’t done much for Hillary Clinton, he seemed to have plenty of time to campaign against Debbie Wasserman Schultz in her primary race. However, a reader who 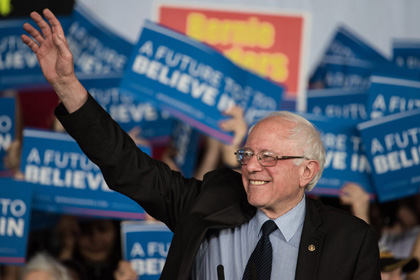 lives in her district says Bernie didn’t actually do anything:

Sanders was a total no-show, who spent his time between the conventions and now doing nothing as far as anyone can tell.  One visit here might have been enough to swing the election, actually calling around would have helped. So don’t give Sanders even the credit of doing more than saying he was endorsing Canova and then checking out.

OK. Maybe Sanders didn’t really care all that much about DSW. And anyway, as of today he’s finally campaigning for Hillary Clinton. Eric Levitz reports:

At present, the Democratic nominee is struggling to win over the septuagenarian senator’s strongest demographic: Recent polls have shown more than 30 percent of millennial voters defecting to third-party candidates.

In a separate interview on Friday morning, Sanders implored such voters to “think hard” before casting a “protest” ballot. “Think about what the country looks like and think about whether you’re comfortable with four years of a Trump presidency,” Sanders said on MSNBC’s Morning Joe. “And I would suggest to those people: Let us elect Hillary Clinton as president. And the day after, let us mobilize millions of people around the progressive agenda, which, by the way, as you know, was passed in the Democratic platform.”

“This is what I know. In politics too much we look at personality….Don’t get hung up on Trump’s kids and whatever, the story of the birther issue. Stay focused on the issue of relevance to your life. I think Clinton is far and away the superior candidate.”

And Sanders will be campaigning for Clinton this weekend in the uber-swing state of Ohio. I wonder if there’s a live feed available? I’ll be very interested to hear what he says. Will it basically be a repeat of his stump speech, focusing on TPP and income inequality and so forth, or will he really campaign for Hillary Clinton? If he does, and if he was just waiting for Labor Day to get going, then all is forgiven.