A couple of worried Democrats are coming over for dinner tomorrow. Since I’m the voice of calm, my job is to explain why they probably shouldn’t be panicking over polls showing that Hillary Clinton’s lead is shrinking. This is pretty easy to do, but first this year’s standard disclaimer:

This is the weirdest presidential campaign in my lifetime. Everything I know might be worthless. Caveat emptor.

OK, so why am I still feeling pretty calm? I could show you the pretty picture from Pollster, which really doesn’t show much change over the past year, but I’ve already done that—and anyway, haven’t I said that Sam Wang is my preferred pollster? Indeed I have. So here is Sam Wang: 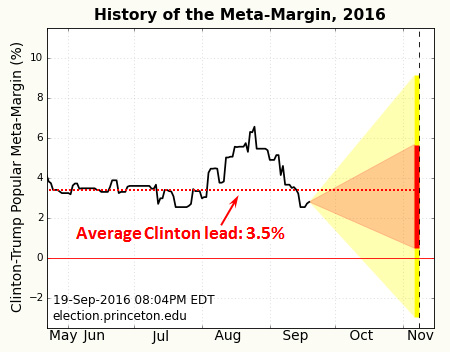 Roughly speaking, Hillary Clinton has had a steady 3.5 percent lead over Trump all year. Then she got a boost from the Democratic convention, followed by a few bad weeks for Trump. That wore off and she dropped back to a little below where she’s been all along. In the last few days, Clinton has started rising again, and my guess is that over the next few weeks she’ll meander back to her longtime lead of 3.5 percent. Pollwise, the single most remarkable thing about the Clinton vs. Trump race is how stable it’s been ever since the day Trump took his famous escalator ride down to the ground floor of Trump Tower to announce his candidacy.

To the extent that Democrats are panicking, I think it’s because a few weeks ago Clinton was ahead by 7 percent or so, and everyone was licking their chops and wondering if a landslide was possible. It was deflating when that turned out to be a mirage. I got caught up in that a bit too, and it was probably foolish. In reality, it was just a temporary bump and was never likely to last.

Still, even if Clinton has a fairly reliable 3.5 percent lead, isn’t that pretty disappointing? I mean, she’s running against a clown like Trump. This isn’t some normal Republican like John McCain or Mitt Romney. She should be ahead by 6 or 7 points. What the hell is wrong with America?

I’m not sure about that. But keep in mind that election fundamentals—Democrats have held the White House for eight years; the economy is in adequate but not great shape; Obama’s approval level has been only fair until very recently—suggest that this should be a Republican year. Alan Abromowitz, whose forecasting model has had reasonable success, figures that Trump should win the popular vote by 3 percent. If, instead, Clinton wins by 3-4 percent, it means she’s outperformed the fundamentals by 6-7 percent. That’s not bad.