Taxpayer cash was used to buy IT equipment — including servers — housed at the Clinton Foundation, and also to supplement the pay and benefits of several aides now at the center 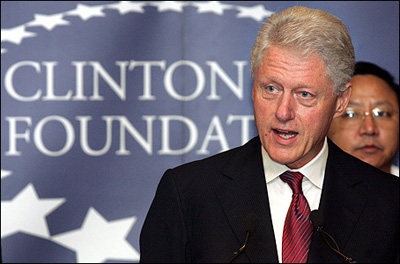 This investigation, which is based on records obtained from the General Services Administration through the Freedom of Information Act, does not reveal anything illegal. But it does offer fresh evidence of how the Clintons blurred the line between their nonprofit foundation, Hillary Clinton’s State Department, and the business dealings of Bill Clinton and the couple’s aides.

….A GSA spokesperson declined to comment on specific employees, but said ex-presidents have broad discretion over how they choose to divvy up the $96,600 they are provided each year for staffing. They can give the entire sum to a single employee or divide it among multiple employees.

So Clinton gets the princely sum of $96,600 each year for staff, and tracks the work these staffers do in his capacity as ex-president. He bills the GSA for that work, and bills other organizations when the staff does work for them. This is bog standard stuff. Staff time is tracked, and then charged out. This is not just “not illegal,” it’s the way pretty much any similar kind of operation works. Even me. Mother Jones pays me an annual salary, but if I write an op-ed or something, I bill that time to whoever I wrote the op-ed for.

Go ahead and read the whole thing. There’s really nothing even remotely blurry or scandalous or shady or anything else. It’s just the standard way anyone operates who has multiple interests, multiple funding sources, and staffers who do work for multiple organizations. There’s no hint that any of the charges were incorrect, or that any of the purchases were misallocated. As near as I can tell, it was all entirely above board, and the GSA was actively involved in scrutinizing everything.

Basically, the reason for headlines like this is because Bill Clinton decided after his presidency to set up a large and active foundation that raised a ton of money for exceptionally worthy causes around the world. If he had decided to just lounge around instead, none of this would ever have come up. It’s a little hard to believe that he’s getting so much grief for this.