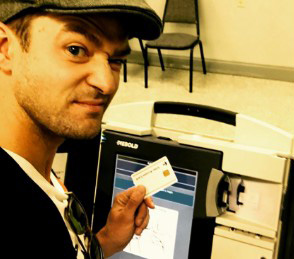 Justin Timberlake snapped a selfie in the voting booth yesterday, and lots of people were outraged that apparently there are laws against this. What happened to free speech!?!

Just for the record, then, there is a reason for selfie bans in voting booths: it prevents vote buying. After all, the only way it makes sense to pay people for their votes is if you have proof that they voted the way you told them to. Back in the day that was no problem, but ever since secret ballots became the norm vote buying has died out. Selfies change all that. If I give you ten bucks to vote for my favorite candidate for mayor, I can withhold payment until you show me a selfie proving that you voted for my guy.

How big a deal is this? I don’t know. Maybe we should go ahead and allow voting booth selfies. But the ban isn’t just a dumb bureaucratic rule. It’s a sensible attempt to prevent voter fraud that has very little cost.