Why are fewer prime-age men working these days? Is it because video games are more attractive than low-paid work? Because they can increasingly rely on women making good incomes? Because society is breaking down? Princeton professor Alan Krueger suggests a large part of it is due to pain and depression:

In a recently released draft of his paper, which he will present at a Federal Reserve conference in Boston on Friday, Krueger finds that 44 percent of male, prime-age labor force dropouts say they took pain medication the day prior — which is more than twice the rate reported by employed men….About two-thirds of the people taking pain medication were using prescription drugs, not over-the-counter remedies like Tylenol or aspirin.

Compared to their employed counterparts, these men also reported more emotional pain — more feelings of sadness, tiredness, and stress….“This is a group is that particularly unhappy and distressed, that often faces significant health conditions which are a barrier to employment,” Krueger said in an interview.

Of course, it could be due to more than one factor. It’s also worth noting that this is a worldwide phenomenon across developed countries: 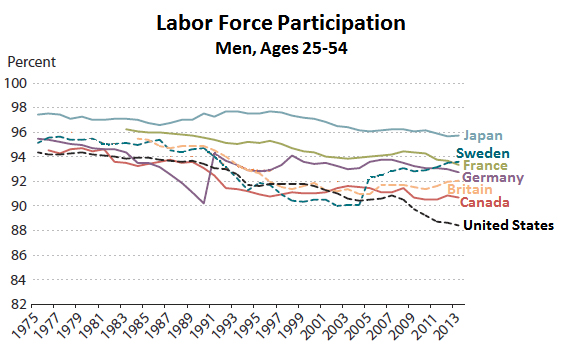 In most countries, male participation in the labor force has been dropping for decades. The US has been near the bottom of the pack for a long time, but saw a much sharper downward spike during the Great Recession than other countries. Does pain account for that?

And what is Sweden’s secret? They fell to the bottom of the pack in the late-90s, but starting in the mid-aughts they beat the trend and have increased the participation rate of men by nearly four percentage points since then. How did they do it?