Unfortunately, I ran into a huge roadblock. Kubota thinks the answer involves the rising cost of childcare, and that certainly sounds reasonable. But take a look at the chart on the right. It comes at the very beginning of a presentation based on his paper. 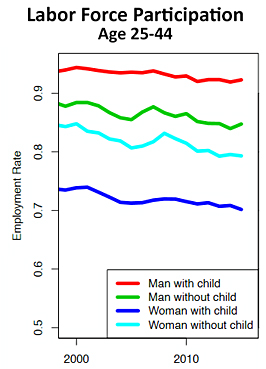 What am I missing here? It seems perfectly sensible that rising childcare costs reduce the net income from market labor and therefore reduce the number of mothers who find it worthwhile to work outside the home. And I’m fully willing to accept that the costs of childcare have gone up over the past couple of decades. That should make a difference, and Kubota estimates that it’s reduced female labor force participation by 5 percent. But Kubota’s own chart suggests that it hasn’t had this effect. All the subsequent discussion of subsidies and market vs. home-based childcare doesn’t change that basic fact.

So the interesting question seems to be this: given that childcare costs have increased, why are labor force participation rates for mothers declining less than those for women without children? That’s a genuine mystery.