For the print issue coming out in a couple of weeks, Josh Harkinson has written a definitive account of the alt-right. You should read it. Here’s one particular bit I want to highlight:

The coexistence of racism and sexism in the so-called manosphere dates back to the dawn of the internet. One early men’s rights site, Fathers’ Manifesto, interspersed references to Warren Farrell’s book The Myth of 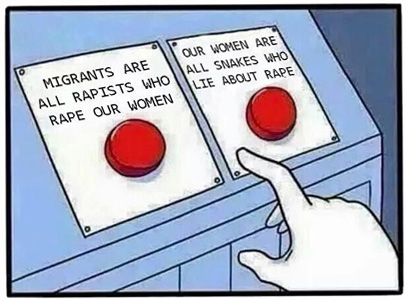 Male Power with calls to exile blacks from America.

[Alt-right pioneer Richard] Spencer readily admits that women make up a small portion of the alt-right, but he has also said that most women secretly crave alt-right boyfriends because they want “alpha genes” and “alpha sperm.” He also believes women are unsuited to some roles in government: “Women should never be allowed to make foreign policy,” he tweeted during the first presidential debate. “It’s not that they’re ‘weak.’ To the contrary, their vindictiveness knows no bounds.”

Revelations of Trump’s sexist comments and his bragging about grabbing women’s genitals only helped forge stronger ties between the racist and sexist wings of the alt-right. After the bombshell revelation of the Access Hollywood tape, Spencer said it was “ridiculous” and “puritanical” to call Trump’s behavior sexual assault, adding, “At some part of every woman’s soul, they want to be taken by a strong man.” Far-right blogger RamZPaul responded to the Trump tape by saying, “Girls really don’t mind guys that like pussies, they just hate guys who are pussies.”

A big chunk of the alt-right is populated by social misfits who have been repeatedly rejected by women and are bitter about it. This makes them suckers for leaders who assure them they aren’t misfits. What’s really happening—and this can be a very beguiling story—is that women toy with them and laugh at them as part of a deliberate ploy to emasculate strong men and keep them from their rightful leadership positions. Because of this, a bitter resentment of women runs through almost every strain of the alt-right.

I don’t know if the alt-right is a truly important new development or just a passing fad—a new name for a lot of the same old resentments that have been around forever. But to the extent the alt-right is important, it’s worth knowing how central this particularly toxic brand of sexism is to the whole movement—even if it doesn’t often get a lot attention. This is also why it’s not right to simply call them racists or neo-Nazis. A lot of them are indeed that, but they’re so, so much more.