Killing the TPP was easy—though I suspect it will make a comeback after Donald Trump renegotiates a few bits and pieces and then loudly announces that he’s made it into the greatest trade deal in the history of the republic. But what about NAFTA? What exactly does Trump want to do? Zeeshan Aleem writes that a 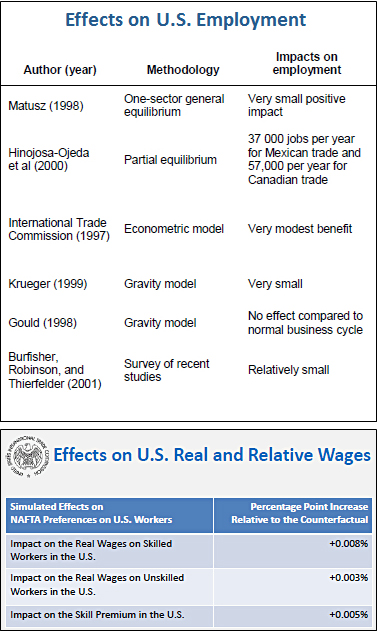 transition team memo makes it clear that NAFTA is at the top of Trump’s to-do list:

Suppose Trump wants to keep the US in the pact but put his self-professed negotiating skills to work in crafting what he insists would be a better version of the deal….There are a number of ways to pursue that end goal, but Trump’s rhetoric suggests he wants to do it by raising tariffs on imports from Mexico. That’s something he’d have difficulty getting Mexico to agree to, so he’d have more latitude to do it if he were to actually withdraw from NAFTA. But withdrawal is a tricky business, given how deeply the countries’ economies rely on each other.

….It would require loads of American businesses bringing existing components of their supply chains and outsourced services back onshore to avoid tariffs or other penalties — a process that takes time and money. It would also potentially increase costs for those businesses going forward.

If that’s [not] enough, the move could set off a trade war by prompting Mexico to raise tariffs on American goods in response. That could cause a downturn in the US economy and a spike in the unemployment employment rate that would undermine the very reason Trump is considering withdrawing from NAFTA.

….The upshot? Trump’s departure from the decades-long bipartisan consensus was politically brilliant….But following through on his promise is going to be difficult. The murky future of NAFTA may be one of the first places where Trump disappoints his followers; it won’t be the last.

Well, we’ll see. Trump almost has to do something, considering how central NAFTA was to his campaign. But in the real world, there’s not much upside. The OECD estimates that NAFTA had essentially no effect on employment, and the International Trade Commission estimates that it had essentially no effect on wages. So withdrawing wouldn’t do any good for all those working-class folks Trump appealed to, but it would cause plenty of upheaval for businesses that are tightly integrated with their Mexican supply chains.1

Of course, NAFTA’s impact hasn’t been the same everywhere. There are a few industries where employment has been negatively affected. So Trump could focus on those and boast about how he’s bringing jobs back to America. Prices of Mexican imports would go up too, but that’s a pretty diffuse effect and most people probably wouldn’t notice it.

So…who knows? As with many other things, I suspect that Trump will get agreement on a few smallish things and then take to his Twitter account to declare that he’s just done more for the American worker than any president ever. At least, I’m kind of hoping that’s what he does. The alternative is almost certainly worse.

1Needless to say, there are lots of estimates of the impact of NAFTA, and some of them suggest large employment effects—like this one from EPI. The general consensus, however, seems to be that it’s had a pretty small impact.