Size apparently matters to Trump. A letter that the businessman candidate displayed this summer from his longtime gastroenterologist — while appearing on the Dr. Oz show — stated he 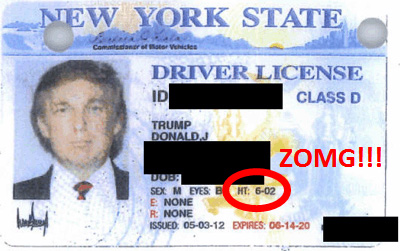 was 6-foot-3, though media reports were quick to point out discrepancies.

Slate, for example, posited that Trump was adding an inch to his height to avoid crossing into obesity territory — he also weighed 236 pounds — on the BMI index. That Slate article pointed to multiple media that pegged Trump as 6-foot-2, including Google, though the search engine now has Trump at 6-foot-3.

ZOMG! Trump is a vain, narcissistic liar? Who knew?

But this reminds me of something. By a remarkable coincidence, I happen to be 6-foot-2 and weigh exactly 236 pounds. I have an unfortunate amount of belly fat to show for this, but nowhere near what Trump does. At a conservative guess, Trump weighs at least 30 pounds more than I do. So he’s lying not only about his height, but also about his weight.

And before you ask: yes, it’s fairly likely that this week will be filled with posts like this. There’s just never much real news during the week between Christmas and New Year’s.