Early this morning Donald Trump launched another one of his famously random tweets:

The F-35 program is pretty famously over budget. I don’t think anyone will argue with Trump about that. But Christopher Bouzy asks an interesting question. Here’s a chart showing Lockheed Martin’s stock price today: 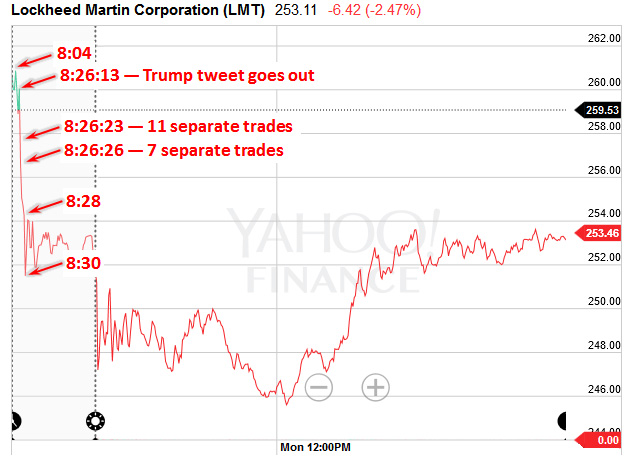 Bouzy wonders if someone profited by knowing about Trump’s tweet a few minutes before it went out. This is a reasonable suspicion if you look at tweeting and trading times down to the minute, but if you look at them down to the second you get a different picture. Trump’s tweet went out at 8:26:13 and there were a flurry of small trades ten seconds later, followed by a second flurry three seconds after that. This caused Lockheed Martin’s price to drop considerably, but only because pre-market trading volume is pretty low and illiquid, so even a smallish trade can send prices down. Most likely, these flurries were day traders who happened to see Trump’s tweet and acted instantly, or perhaps some kind of bot that reacts to Trump tweets.1

But even if there was no hanky panky, our president-elect still seems to have had an effect: Lockheed Martin stock traded very heavily today and closed down by more than two percent. Coincidence? Or a response to Trump’s tweet?

This revives a question we asked last week after Trump tweeted about Softbank, sending Sprint and T-Mobile stock upward. Do we really want the president of the United States calling out individual corporations and affecting their stock prices? Do we really want to be left wondering if maybe someone had a little advance knowledge of Trump’s tweets? That doesn’t seem to have been the case today, but if you knew a day ahead, for example, your trade would get lost in the noise and no one would ever know.

I assume the answer to these questions is no, isn’t it?

1Ridiculous? Not at all. I’d be surprised if someone hasn’t done this.