The fourth and final part of our series of charts from the Economic Report of the President has no theme. It’s just three unrelated charts that I felt like posting. First up, here is the IMF’s forecast of global growth over the six years since the end of the Great Recession: 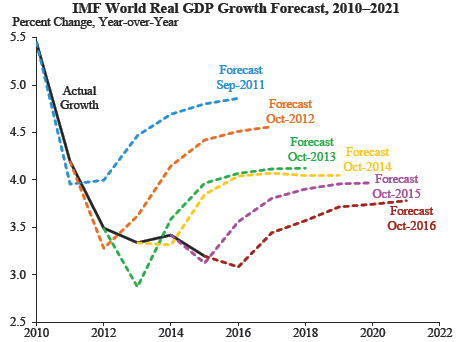 Every year they think the decline in growth is over and the global economy will pick up again. And every year they’re wrong. Now they’re forecasting the same thing in 2016. Next year we’ll find out if they’re finally right.

Next up is a chart that shows how oil prices affect national economies in the Middle East: 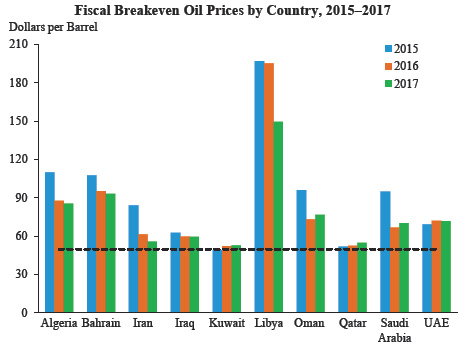 Kuwait can balance its budget with an oil price of $50 per barrel. Saudi Arabia needs about $70. Bahrain needs $90. And Libya needs to start spending less.

Finally, here’s a chart I’ve put up in various forms several times over the years: 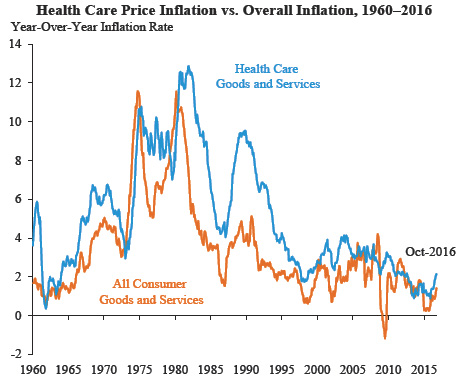 We’ve grown used to thinking of health care costs as spiraling out of control, but that wasn’t a regular fact of life until the early 80s. Then, for the next 20 years, health care inflation ran way higher than overall inflation. However, the gap started narrowing as early as the mid-90s. Here’s a chart of my own that shows the gap directly: 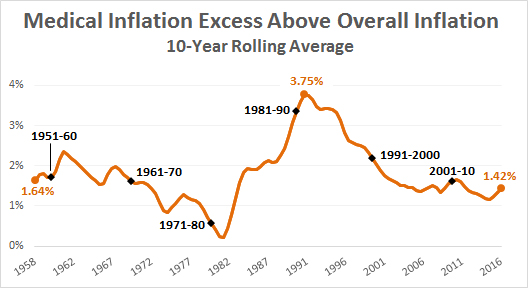 Using a 10-year rolling average helps smooth out the spikes so we can focus on the trend instead. Medical inflation was fairly moderate in the late 50s and then declined fairly steadily to even lower levels until the early 80s. Then it skyrocketed, and this is the era we’re most familiar with. But by the early aughts it had fallen back to its previous level in the 60s and 70s, and it’s stayed there for the past 15 years.

The authors of the report try to make a case that the subdued medical inflation of the past few years is due to Obamacare, but they try too hard. Obamacare has likely had some effect, but basically it just had the good luck to go into effect at a time when medical inflation was already pretty low.

What this all shows is that we should change how we think of medical inflation. Most of us think of it as something that’s out of control, and we hope that the recent slowdown isn’t just a blip. Instead, we should think of the period from 1980-2000 as a blip. Except for those two decades, medical inflation has run steadily at about 1.5 percent above overall inflation, and there’s no special reason to think this will change. That’s the normal rate for the postwar era.