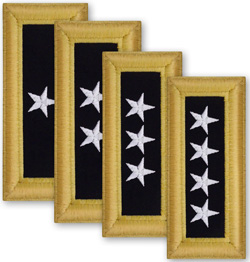 Over at the Washington Examiner, Jamie McIntyre makes a fair point about Trump’s military-heavy cabinet:

“I am concerned that so many of the President-Elect’s nominees thus far come from the ranks of recently retired military officers,” Rep. Steny Hoyer, D-Md., said in a statement Wednesday evening….Yet when President Obama assembled his Cabinet in 2009, he also ended up with three retired four-stars in his inner circle: [Jim] Jones as his national security adviser, retired Army Gen. Eric Shinseki as veterans affairs secretary, and retired Navy Adm. Dennis Blair as director of national intelligence. That’s 12 stars to Trump’s 11.

Technically, DNI isn’t a cabinet-level position, but it’s hard to argue that it’s less important than, say, Secretary of the Interior. Of course, Trump still has some positions to fill, including DNI, so we might not be done with the generals yet. Still, if Trump sticks with the three he’s got, it’s not out of the ordinary.

The real issue with Trump seems to be that he’s chosen a retired general to run the Department of Defense. It’s reasonable to object to this, but let’s just object to it, instead of claiming that Trump’s cabinet is unusually heavy with ex-generals.