Today the Centers for Disease Control announced that life expectancy at birth declined slightly between 2014 and 2015. I wonder how they calculate that? They’re basically predicting death rates around the year 2100, and it hardly seems likely they can do this. My understanding is that it’s based on age-specific death rates prevailing for the current year, but what makes anyone think those death rates will remain the same for the next 80 years?

That’s a question for another blog post, I suppose. One thing is for sure, however: we can certainly take a look at death rates right now. And this, in particular, is disturbing: 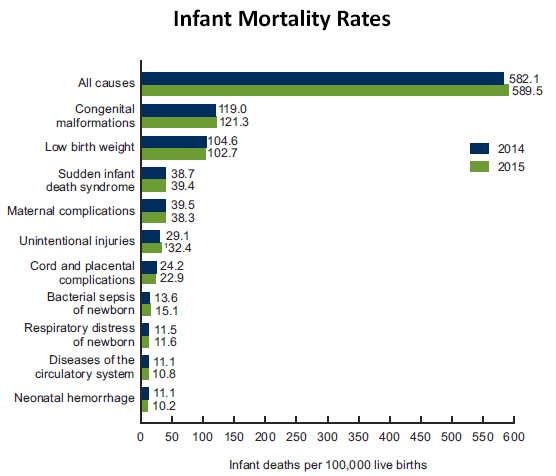 Infant mortality in the US is already far higher than it is in the rest of the developed world. It’s under 450 in France, Germany, and Britain, for example, and under 350 in Italy, Japan, and Norway. The only OECD countries with higher infant mortality rates have per-capita incomes less than half ours.

To make things worse, the rate of infant mortality among blacks is double what it is among whites and Hispanics. It’s a horror story—and apparently it’s getting worse. How is this possible?