Today, Chris Herbst of Arizona State University emails to say my skepticism is justified. The problem, he says, is that well-off families increasingly spend a lot for premium childcare, and this boosts the average. If, instead, you look at medians, childcare expenditures haven’t really gone up that much. Instead of rising 32 percent between 1990 and 2011, the median increase is only 16 percent. What’s more, virtually all of that increase happened during the 90s. Since childcare is labor intensive, he uses the earnings of childcare workers as a proxy for the cost of childcare. Here’s what that looks like: 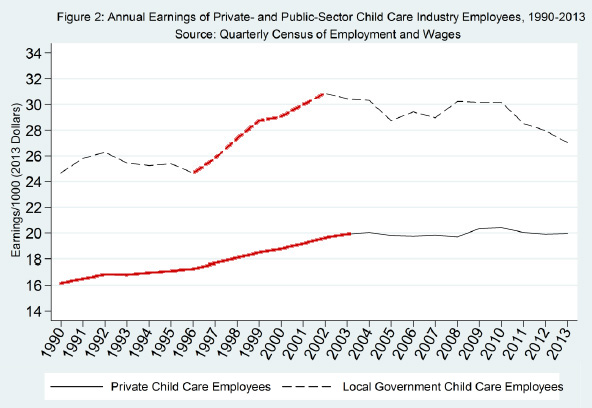 Long story short, if the cost of childcare hasn’t gone up much for working-class and middle-class families, then it probably has little effect on the labor force participation rate of women. The full paper is here, and it has some other interesting tidbits. For example, Herbst finds that the modest increase in childcare expenditures masks a big split: expenditures have gone up a lot for children under five, but have actually gone down a bit for older children. Perhaps there’s some further work to do comparing the labor force participation of women with toddlers vs. women with school-age children?