Mick Mulvaney, a lunatic budget hawk who entered Congress in the great tea party wave of 2010, will be our new director of the Office of Management and Budget. Most people probably think this is bad because he’s a lunatic budget hawk, but I’m not sure how much that matters. After all, Paul Ryan is already a budget hawk—except for budget-busting tax cuts, of course—and defense spending—and anything else that conservatives happen to like. But anyway, he’s a budget hawk as that term is currently abused. So Mulvaney probably doesn’t add an awful lot to the total weight of budget hawkery that will rule Washington, DC, next year.

But OMB is important for an entirely different reason: It plays a huge role in the regulatory process. Allow me to quote from the OMB website:

The Office of Information and Regulatory Affairs (OIRA) is a statutory part of the Office of Management and Budget within the Executive Office of the President. OIRA is the United States Government’s central authority for the review of Executive Branch regulations, approval of Government information collections, establishment of Government statistical practices, and coordination of federal privacy policy. The office is comprised of five subject matter branches and is led by the OIRA Administrator, who is appointed by the President and confirmed by the United States Senate.

Mulvaney will be the patron saint of “cost-benefit” analysis of federal regulations—which, in Republican hands, normally means totting up the costs and ignoring the benefits. In particular, it means that environmental regulations, even those with immense benefits, will be scored into oblivion and never see the light of day. Lucky us. 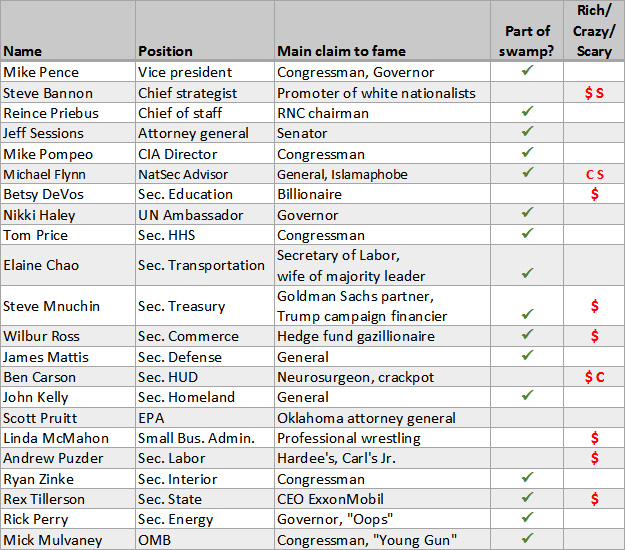