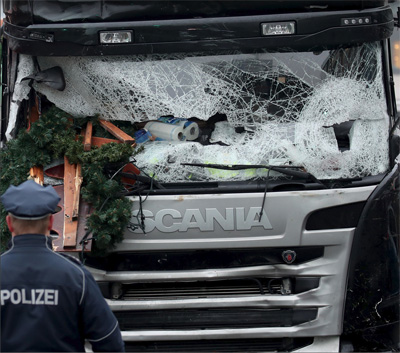 The nanny-staters at the EU are at it again:

E.U. regulations adopted in 2012 require that all newly manufactured trucks heavier than 3,500 kilograms (3.9 tons) be fitted with an advanced emergency braking system. The systems use radar and cameras to detect obstacles and warn the driver. In the event of a crash, the brakes may stop the vehicle entirely. Although the driver can override the brakes, an inexperienced user may not know how.

The truck attack on a Christmas market in Berlin last week may have been cut short when the truck automatically deployed its brakes, the result of European Union regulations that require automatic braking systems on large trucks.

The new detail, revealed jointly by Germany’s Süddeutsche Zeitung newspaper and broadcasters NDR and WDR on Tuesday, may explain why the truck came to a stop after a few hundred feet. In the end, twelve people were killed in the attack, but there are indications that the E.U.-mandated advanced emergency braking system may have prevented more deaths.

How about that? The regulatory state FTW.