How big an impact did NAFTA have on the US economy? Back when it was being debated, there were several fairly extravagant studies floating around, and to this day nobody has forgotten about them. Practically every discussion of NAFTA begins with something like “advocates of NAFTA made at the outset some wildly optimistic claims about what NAFTA was going to achieve.” For example, here’s Dani Rodrik:

Remember first that many advocates of NAFTA made at the outset some wildly optimistic claims about what NAFTA was going to achieve….A recently published academic study by Lorenzo Caliendo and Fernando Parro uses all the bells-and-whistles of modern trade theory to produce the estimate that these overall gains amount to a “welfare” gain of 0.08% for the U.S. 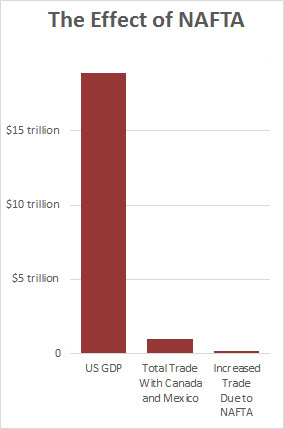 Brad DeLong pushes back against this here, but I want to show you something which should convince you that NAFTA’s impact on the US—whether good or bad—is inevitably tiny. The chart on the right shows total US GDP: about $19 trillion. The next bar shows total US trade—both imports and exports—with Canada and Mexico. It’s about $1 trillion. Finally, the third bar shows how much of the increase in this trade since 1993 is due to NAFTA. Most estimates put it at 20 percent or less of the total.

In other words, NAFTA’s gross trade effects, at most, are about 1 percent of GDP. And since many of the positive and negative follow-on effects of that trade cancel out, the net effect on the American economy has to be a fraction of a percent. It’s just not a huge deal. It hasn’t accounted for very many jobs lost or gained. It hasn’t accounted for a big change in GDP. It hasn’t accounted for a significant change in price levels. Making it the centerpiece of any kind of trade story is just absurd. It’s a good hobbyhorse for populist demagoguery of trade deals, and it’s a good hobbyhorse for populist demagoguery of Mexico. But that’s about it.