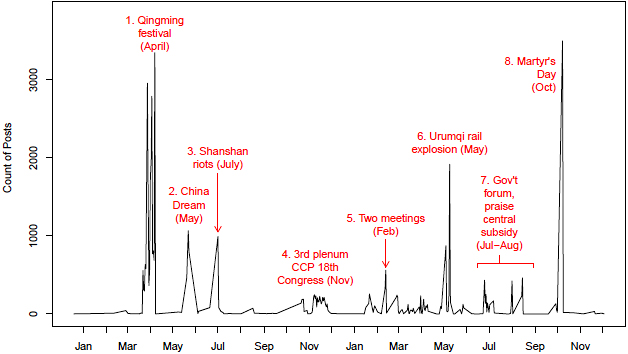 The Chinese government is the acknowledged expert at authoritarian use of social media to promote party goals. So how do they do it? Alex Tabarrok points today to a new paper that engaged in a ton of ground-level research to come to a conclusion that shouldn’t surprise anyone. They don’t waste their time trying to change minds:

We estimate that the government fabricates and posts about 448 million social media comments a year. In contrast to prior claims, we show that the Chinese regime’s strategy is to avoid arguing with skeptics of the party and the government, and to not even discuss controversial issues. We infer that the goal of this massive secretive operation is instead to distract the public and change the subject, as most of the these posts involve cheerleading for China, the revolutionary history of the Communist Party, or other symbols of the regime.

As the chart at the top of this post shows, the government’s social media army leaps into action at all the appropriate times, but instead of defending the party or the government, they just spend their time distracting attention onto other subjects.

I hardly need to mention that this strategy should remind you of someone.