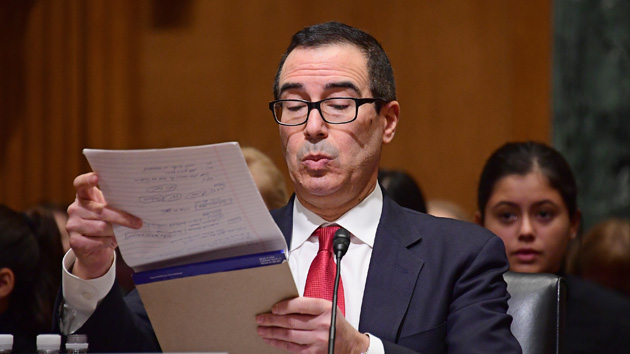 When Steven Mnuchin, Donald Trump’s pick for secretary of the Treasury, was asked about tax reform in his confirmation hearing on Wednesday, he took things in a surprising direction: He suggested that the IRS needed a larger staff.

“I was particularly surprised, looking at the IRS numbers, that the IRS headcount has gone down quite dramatically, almost 30 percent over the last number of years,” Mnuchin said in response to a question from Sen. Orrin Hatch, a Utah Republican….“Now perhaps the IRS just started with way too many people,” Mnuchin added. But he suggested that “staffing of the IRS is an important part of fixing the tax gap.”

For those of you who don’t get the joke, this is sort of like Mnuchin testifying in front of a bunch of mafia dons and expressing surprise that they charge such high interest rates in their lending operation. Maybe with lower rates you gentlemen could expand into the suburban market and gain a share of the home equity business? Lotta kitchen remodels out there.

Basically, Mnuchin looked at the IRS numbers like a normal person and was surprised to see that they weren’t trying to maximize tax collections. He apparently didn’t realize that the Republicans he was testifying in front of have been very deliberately slashing the IRS budget for years precisely so they can’t maximize tax collections. The last thing Republicans want is an IRS that audits rich people more closely.

Mnuchin will learn. After all, Donald Trump did. Remember when Trump suggested that women who get abortions should be punished? He had no idea what he was talking about, and just assumed that since Republicans consider abortion bad, the maximal anti-abortion position must be good. He didn’t realize that jailing middle-class teenagers is a position unpopular enough to jeopardize GOP reelection prospects, and as a result Republicans have long insisted that even if they manage to make abortion illegal, they will always consider women who get abortions to be “victims” of unscrupulous butchers, not lawbreakers. That’s the party line, anyway, and everyone is expected to know it.

Before long, I’m sure Mnuchin will learn to listen respectfully to harangues about the gold standard and fiat money and ending the Fed. It’s a small price to pay for the opportunity to occupy the position once held by Alexander Hamilton.