Here’s some good news for MLK Day. The incarceration rate for young black men is now down more than half since 2001: 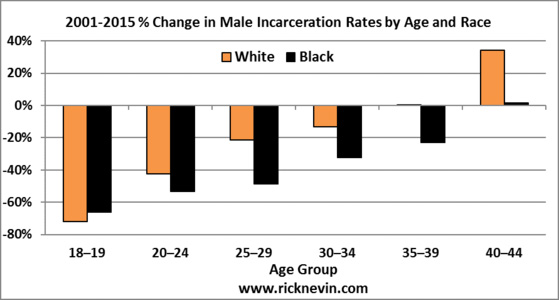 The not-so-good news is that this has nothing to do with better criminal justice policies or efforts to create opportunities for people of color. It’s because of lead. The younger you are, the more likely you are to have grown up in a (mostly) lead-free environment, and that means you’re less likely to have committed a felony or gotten sent to prison. Because prison sentences in America tend to be long, de-incarceration lags falling crime rates by a fair amount, but eventually it does catch up.

You’ll note that, generally speaking, black incarceration has fallen more than white incarceration. The reason for this is simple: the biggest victims of lead poisoning in the 1960-90 era were residents of urban cores, which had more lead paint and higher concentrations of gasoline lead than other areas. These residents were disproportionately black, so when lead levels went up it affected blacks more strongly than whites. But when leaded gasoline was banned and lead poisoning declined, that also affected blacks more strongly than whites. Black crime rates fell more steeply than white crime rates, and now black incarceration is falling more steeply than white incarceration.

We’re still at nothing close to parity, of course. Lead explains some things, but it doesn’t explain the stain of racism and greed in men’s hearts. This is America’s original sin, and it will take more than an EPA regulation to overcome it.