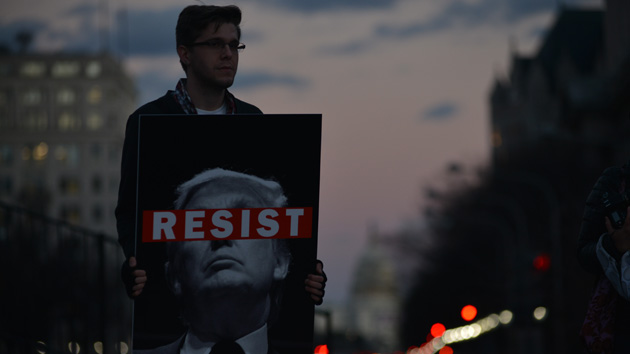 In situations where most people get angry, I mostly get depressed. Today I feel like hiding under a rock.

Yesterday President Trump made good on his campaign promise to halt immigration of Muslims into the United States “until we know what’s going on.” An explicit ban on Muslims would be illegal, of course, even considering the president’s broad authority over immigration, so instead he picked seven Muslim countries and banned their citizens from entering the US for 90 days—by which time, presumably, Trump will have figured out what’s going on. He also banned refugees from everywhere for 120 days. The result has been rampant chaos and pointless suffering because no one knows precisely who this applies to or how it’s supposed to work.

A friend writes: “I’m amazed at how badly Trump, et al. have been handling the executive orders they’ve been churning out. Don’t they know the orders are legal documents, not corporate memos?” That’s a good question. As near as I can tell, Trump is treating his executive orders the same way he treats his tweets: they’re designed as communiques to his fans, and that’s about it. The actual consequences hardly matter.

What other conclusion can you draw from this latest bumbling fiasco? Consider:

Not a single Muslim extremist from any of the seven designated countries has ever committed an act of terrorism on American soil.

But residents of Saudi Arabia, Egypt, Pakistan, and other US “allies” are exempt, even though their citizens have committed acts of terrorism here. By coincidence, these are also countries where Trump has commercial interests.

The executive order mis-cites the relevant immigration statute. Ed Whelan wonders if this means the Office of Legal Counsel is out of the loop:

If this error signals that White House is bypassing ordinary OLC review of EOs, that would be bad news. Important to get EOs right. https://t.co/iObtMa1QjK

The refugee ban is heartbreaking, especially for folks who have sold everything and were literally in the airport waiting to board a plane when they were turned back. But the order also applies to green card holders. These are legal residents. If they were overseas at the time the ban went into effect, they can’t return home.

There’s no excuse for this. The EO could have exempted green card holders. At the very least, it could have gone into effect for them after a warning period. But nobody in the White House gave a damn. So now airports are jammed with legal residents who are trying to return home to their families but are being denied entry.

The Secretaries of State and Homeland Security are allowed to issue exemptions on a case-by-case basis. Does this mean either of them can, or that both have to sign off? Because there is no Secretary of State right now.

Republicans are mostly too callous, or too craven, to speak up about this debacle. I don’t need to bother checking to see what Breitbart and Ann Coulter think. I’m sure they’re thrilled. But even mainstream conservatives are largely unwilling to speak up about this. The Wall Street Journal editorial page has been unable to rouse itself so far to express an opinion. Ditto for the Weekly Standard. I thought the same was true of National Review, but no: they roused themselves to mostly approve of what Trump is doing. Paul Ryan, who once thought this kind of thing was terrible, is also on board. So is Mitch McConnell. And Mike Lee. And most of the rest of the GOP caucus. This is how we got Trump in the first place. Is it really worth it just for another tax cut?

Airports are now flooded with stranded travelers. People who have lived in the US for years are unable to return to their homes. Nobody knows if any exceptions will be forthcoming from our Secretaries of State or Homeland Security. It’s chaos everywhere.

And for no reason. Refugees are already extremely tightly vetted. Visas are tightly vetted too from the countries on Trump’s list. The green-card chaos could have easily been avoided if anyone had cared enough to think through the executive order before issuing it. Or if Trump had thought that any high-ranking Republicans would make him pay a price for being so ham-handed.

But they didn’t. As always, Republicans are ruled by a mean-spiritedness that’s just plain nauseating. They’re perfectly willing to go along with a plan that will cause tremendous hardship for other people even though they know perfectly well it will do nothing for national security. Its only real purpose is to send a message to a GOP base eager for a show of bravado against the rest of the world. Is that worth a bit of senseless cruelty aimed at defenseless foreigners? Of course it is. Hell, that’s the whole point. And the suffering this causes? As usual, they just don’t give a damn.