If you want to talk about mass incarceration, here’s the most important fact to know: 90 percent of all American inmates are kept in state and local prisons. Unless you have some specific reason, you should pretty much ignore all statistics about the federal prison system.

This is not Keith Humphreys’ main point in his Wonkblog post today about mass incarceration, but it might as well be. If you look at state lockups, here’s the basic data for why most folks are incarcerated: 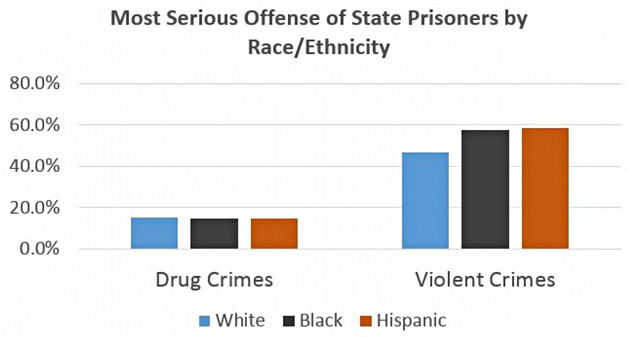 Drug offenses make up only about 15 percent of the total inmate population. And since it’s common to plea down to a minor drug offense from a more serious offense, even this probably overstates the number of people in prison for nonviolent drug offenses. So if we want to reduce the prison population, decriminalizing drugs won’t make much of a dent. Instead, we need to focus on our response to violent crime:

In the eyes of many politicians, activists and most of the voting public, tough punishment of nonviolent drug offenders is the main driver of mass incarceration in general and disproportionate imprisonment of people of color in particular. But in his new book “Locked In,” criminologist John Pfaff challenges that assumption, attributing mass incarceration primarily to violent crime and the public policy response to it.

….Given the outsize role of violent crime in mass imprisonment, what should be done about it? Pfaff favors “cutting long sentences for people convicted of violence, even for those with extensive criminal histories, since almost everyone starts aging out of crime by their 30s.” He also advocates for relying less on prison altogether and expanding community-based anti-violence programs that have strong evidence of preventing violence in the first place.

Our main reaction to the violent crime wave of the 70s and 80s was not just to lock up more people, but to lock them up longer. A lot longer. However, there’s little evidence that longer sentences do much to deter crime, and as Pfaff says, once prisoners get into their 30s there’s not much evidence that keeping them locked up prevents very much crime. My horseback guess (I haven’t read Pfaff’s book) is that we could cut the average sentence for violent crimes in half and it would have only a minor effect on crime rates. Partly this is because we overshot the sweet spot for reducing crime by a lot in the 70s and 80s, and partly it’s because criminals these days aren’t as violent as they were in the past.1

Unfortunately, this is one of the hardest lifts in all of politics. Even now, no one wants to be “soft on crime,” and it’s inevitable that if we did reduce sentences, some of the prisoners would go out and commit more crimes. All you need is a few examples of that to run some devastating TV ads, and there’s no question that these examples would be out there. Pfaff has the right idea, but it’s unlikely to get an audience anytime soon.