Not satisfied with proposing $54 billion in domestic spending cuts for next year, today President Trump asked Congress to cut $18 billion in what’s left of the current fiscal year:

The White House is asking Congress to cut $18 billion from discretionary spending bills for the current fiscal year that have been long settled — a move that could threaten a major showdown just a month ahead of the deadline to keep the government funded….The $17.94 billion cut would help pay for Trump’s military supplemental request, which was sent to Congress earlier this month. About $2 billion would also go towards Trump’s proposed wall along the Mexican border.

This is yet another half-baked Trump idea, and it’s the last thing Congress needs on its plate right now. Health care failed because they tried to rush it through, and now they have a grand total of 65 legislative days to work on tax reform and finish up the budget for next year. They really can’t afford to waste their time on dumb stuff like this.

Aside from that, I continue to be perplexed about this whole thing. These cuts are supposed to pay for Trump’s $30 billion supplemental military request, $25 billion of which is targeted for the Pentagon’s base budget. But Congress can’t do that. The sequester caps prevent it, and there’s no way to increase the caps without Democratic cooperation. John Boehner struck a bipartisan deal to do that in 2015, but there’s no way Republicans are going to get a similar deal while also proposing whopping big domestic cuts. 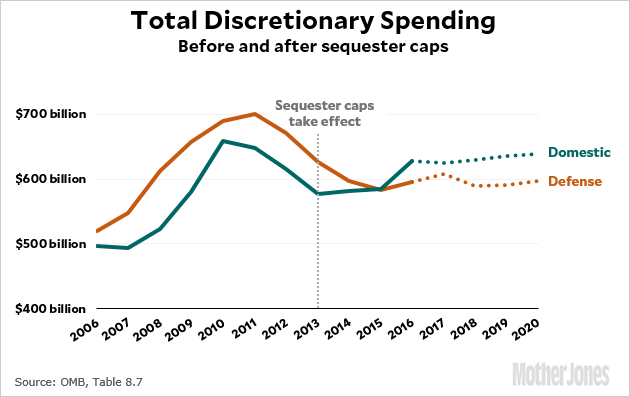 The same is true of Trump’s proposal to increase military spending $54 billion next year. So what’s the point of all this? I can think of three basic scenarios that Trump might be hoping for:

None of these seem especially likely, and only #2 seems even remotely within the realm of the plausible. The Democratic position right now is that they’ll increase military spending caps only if domestic caps are raised by the same amount. They might agree to a smaller increase for domestic spending, but there’s no chance they’ll go any further. Why should they? Trump really doesn’t have any leverage here.

One possibility, of course, is that Congress will put all $54 billion into the Overseas Contingency Operations fund, which isn’t affected by the sequester caps. But if that’s the plan, why not propose the same thing for this year’s request? Am I missing something?