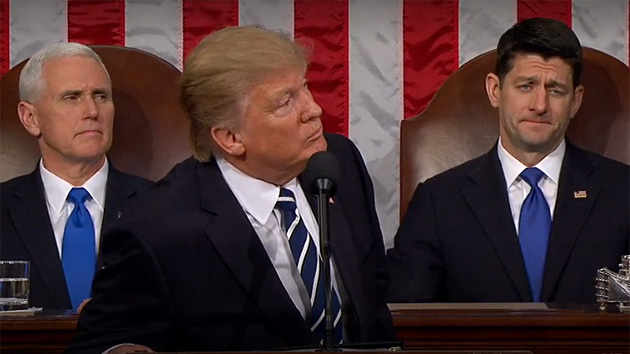 Watching CNN after Trump’s speech, I heard Gloria Borger talk about how authentic Trump’s tribute to Ryan Owens was. Here’s what Trump said:

We are blessed to be joined tonight by Carryn Owens, the widow of a U.S. Navy special operator, Senior Chief William “Ryan” Owens. Ryan died as he lived: a warrior, and a hero — battling against terrorism and securing our nation.

I just spoke to General [Jim] Mattis, who reconfirmed that, and I quote, “Ryan was a part of a highly successful raid that generated large amounts of vital intelligence that will lead to many more victories in the future against our enemies.” Ryan’s legacy is etched into eternity. For as the Bible teaches us, there is no greater act of love than to lay down one’s life for one’s friends. Ryan laid down his life for his friends, for his country and for our freedom — we will never forget him.

This was, perhaps, the most inauthentic part of Trump’s entire speech. It was there for one reason only: to exonerate his own bad judgment by insisting yet again that the Yemen raid was “highly successful.”

It wasn’t. It was hastily planned because Trump wanted to show that he was tougher on terrorism than Obama. Instead of going over the plan in detail in the Situation Room, he casually approved it over dinner. The raid itself was a mess, apparently because the SEAL team was detected going in. Owens was killed, a helicopter was destroyed, none of the targets were killed, and contra Mattis, it seems to have produced hardly any worthwhile intelligence at all.

So naturally it became part of his speech tonight. Was his respect for Owens genuine? Of course it was. Is that why he emphasized how successful the raid was? Of course not. That was purely calculated. He was covering up his own failure with the tears of a widow, nothing more.