According to the 2012 and 2016 exit polls, Hillary Clinton did six points worse than Barack Obama among Latinos, receiving only 66 percent of the Latino vote. Donald Trump did one point better than Romney, receiving 28 percent of the Latino vote. Ever since, a group called Latino Decisions has been insisting that the exit polls are all wrong, and Clinton actually received a much larger percentage of the Latino vote. Today they highlighted a new study in the Nevada Independent that examines voting by precinct and then compares the results to 2012. Here’s what it looks like for Nevada: 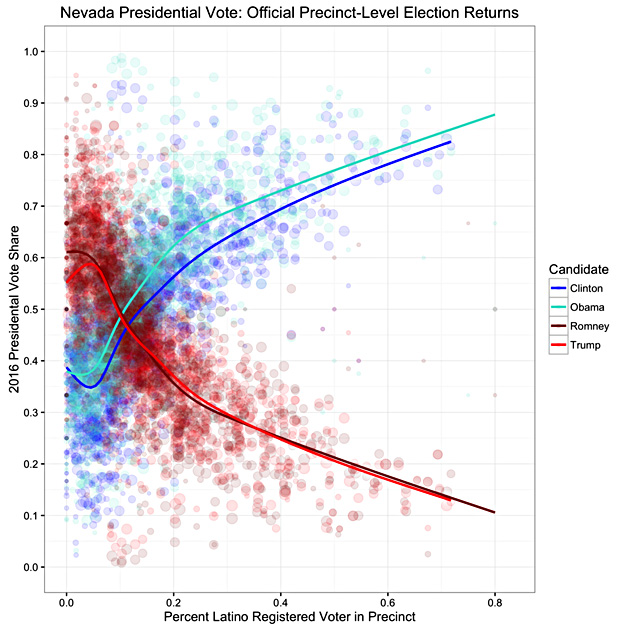 The authors say that Trump seems to have gotten about the same vote share as Romney: “It is therefore extremely unlikely that more than one in four (28 percent) Latinos in Nevada turned out for Trump, as purported by the exit poll. Instead, it is likely that Clinton won just under 9 out of 10 Latino voters, leaving 1 in 10 to Trump.”

There are all sorts of criticisms to make of this approach, the biggest of which is that the authors’ own chart suggests that Clinton got fewer Latino votes in Nevada than Obama. If Obama got 71 percent in Nevada, that sure doesn’t gibe with Clinton getting 88 percent. But let’s put that aside. I have a different question. First, though, let’s leave Nevada and take a look at the national vote. Here’s a reminder of what the exit polls look like for 2012 and 2016:

Trump received 46 percent of the popular vote in 2016 compared to 47 percent for Romney in 2012. That’s a loss of one percentage point. However, the exit poll for the white vote is based on a large, widely distributed sample, so it’s pretty reliable—and it shows that Trump lost two points of the white vote compared to Romney. This means that Trump must have gained roughly one point among all the other groups in order to come out only one point behind in the overall vote.

So if Trump gained one point among the non-white vote, the only way he could have done substantially worse than 28 percent among Latinos is if he did substantially better among blacks and Asians. It’s the only way the arithmetic works. How likely is that?

This is why I think the exit polls are probably right about the Latino vote. If they’re off by a lot, you have to come up with a plausible recount of all the other racial groups that adds up to the right total number. I don’t see how you can do that.