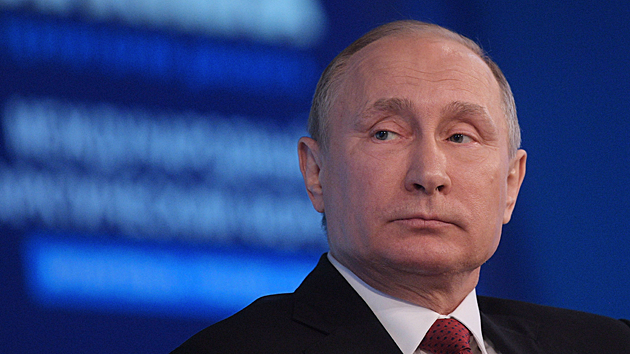 Reuters reports that Vladimir Putin personally directed RISS, a Russian think tank, to develop plans to interfere with the US election:

….The first Russian institute document was a strategy paper written last June that circulated at the highest levels of the Russian government but was not addressed to any specific individuals. It recommended the Kremlin launch a propaganda campaign on social media and Russian state-backed global news outlets to encourage U.S. voters to elect a president who would take a softer line toward Russia than the administration of then-President Barack Obama, the seven officials said.

A second institute document, drafted in October and distributed in the same way, warned that Democratic presidential candidate Hillary Clinton was likely to win the election. For that reason, it argued, it was better for Russia to end its pro-Trump propaganda and instead intensify its messaging about voter fraud to undermine the U.S. electoral system’s legitimacy and damage Clinton’s reputation in an effort to undermine her presidency, the seven officials said.

According to Reuters, there’s no evidence that the Trump campaign colluded in this. It was purely a Russian operation. Nor did the RISS plans say anything about the release of hacked emails. “The officials said the hacking was a covert intelligence operation run separately out of the Kremlin.”

So we have the RISS plan. We have the email hacks, which were far more extensive than initially reported. We have the RT cable network and the Sputnik news agency, which specialized in anti-Clinton stories. We have the Russian troll factory in St. Petersburg writing pro-Trump tweets under hundreds of aliases. We have thousands of Russian Twitter bots to make sure the tweets went viral. We have Fancy Bear and Cozy Bear and dozens of other covert Russian operations. We have Guccifer 2.0. We have DCLeaks.com. And finally, Russia appears to have used Wikileaks—either wittingly or unwittingly—for maximum exposure of all its hacks.

That’s a pretty big operation. Did it work? We’ll never know, but given how close the election was, the answer is probably yes.