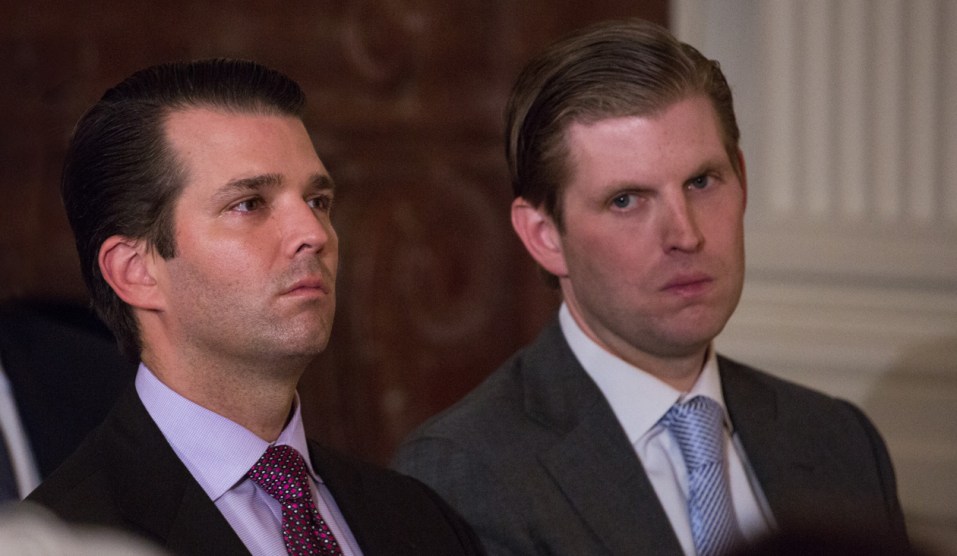 Yesterday the New York Times reported that Jared Kushner and Donald Trump Jr. met with a Russian national shortly after last year’s Republican Convention. The meeting was with Natalia Veselnitskaya, “a Russian lawyer who has connections to the Kremlin,” and it wasn’t disclosed until recently, when Kushner filed an amended version of his security clearance form. The subject of the meeting, according to Don Jr., was American adoptions of Russian babies.

That seems…unlikely, but the story nonetheless struck me as just another tiny brick in the Trump-Russia story that didn’t really add much to what we know. That changed today when the Times dished up some more details:

President Trump’s eldest son, Donald Trump Jr., was promised damaging information about Hillary Clinton before agreeing to meet with a Kremlin-connected Russian lawyer during the 2016 campaign, according to three advisers to the White House briefed on the meeting and two others with knowledge of it.

Hmmm. That’s more interesting, but it’s still based on anonymous sources who may or may not have an axe to grind. The only way we’d know for sure is if Don Jr. fessed up to it, and what are the odds of—

In a statement on Sunday, Donald Trump Jr. said he had met with the Russian lawyer at the request of an acquaintance. “After pleasantries were exchanged,” he said, “the woman stated that she had information that individuals connected to Russia were funding the Democratic National Committee and supporting Ms. Clinton. Her statements were vague, ambiguous and made no sense. No details or supporting information was provided or even offered. It quickly became clear that she had no meaningful information.”

He said she then turned the conversation to adoption of Russian children….“It became clear to me that this was the true agenda all along and that the claims of potentially helpful information were a pretext for the meeting,” Mr. Trump said.

OK then. Whether it was a pretext or not, the Trump folks really did take the meeting in hopes that a very plugged-in Russian lawyer could deliver some dirt on Hillary Clinton. This is hardly proof of collusion, but it certainly moves things a little further in that direction.

The Trump White House has been asked over and over about meetings between campaign aides and Russian nationals. This certainly counts, but they didn’t reveal it even to the government until recently, and didn’t disclose it publicly until the Times forced them to. Even then, Don Jr. insisted that the meeting was only about Russian adoptions until the Times once again forced him to admit that it had actually been arranged based on promises of Russian info about Hillary Clinton.

This kind of prevarication is what keeps this scandal going. Team Trump keeps swearing they’ve disclosed everything and there’s no there there. Then it turns out there’s something else. Then they lie about that something else until someone forces the truth out of them. This is not how innocent people act.

I’m wary of taking this too far. Hillary Clinton herself suffered during the campaign (and for years before that) from sometimes acting guilty even when she wasn’t. In the case of Clinton, I think this happened because of her profound distrust of the media. In the case of Don Jr., it could easily happen because he’s dumb enough to think he’s being clever. So it might not mean very much at all.

Still, it’s yet another part of the drip drip drip. I continue to believe there was no serious collusion between Trump and the Russians, mainly because I can’t believe anyone would be so stupid. But I admit this is not always a reliable heuristic. Plus, if there’s anyone who could be this stupid, it would be the extended Trump family.