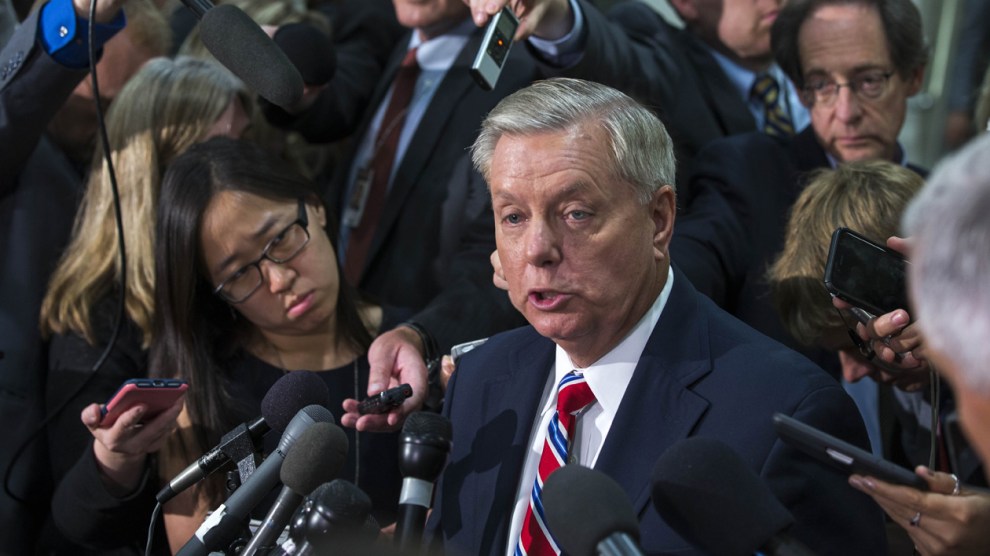 Mitch McConnell is circulating another health care bill today, and it’s like a game of whack-a-mole. The original bill would de-insure millions of people, so the new one puts a bunch of patches in place. But those patches cause obvious problems, so there are patches for the patches. It’s a purely political exercise in vote-getting that has no connection to actual health care. Good luck to the CBO trying to score this Rube Goldberg contraption.

Meanwhile, we now have another health care bill, this one from Bill Cassidy and Lindsey Graham:

The Senate GOP’s push to rewrite the Affordable Care Act suffered an ill-timed setback Thursday, as two centrist Republicans announced plans to offer their own health-care plan just as leaders released an updated bill of their own….In a joint interview with CNN on Thursday, Cassidy and Graham said that they would take the billions of dollars the federal government now receives in taxes under the ACA and direct that revenue to the states.

….“Our problem has been trying to combine tax reform with replacement of Obamacare,” Cassidy said. “We’re giving the money back to the states. The states can do what they want to do. A blue state can do a blue thing; a red state can do a red thing.”

Um, what? Just hand big pots of money to the states and tell them to paint the town red? Apparently so. Here are the details from Graham’s website:

This should go over well with the insurance industry. They will be required to insure everyone at the same price, but they have no idea what rules will be in place to ensure against a death spiral. That’s genius.

By the way, there are lots of other Obamacare rules and regulations that can’t be repealed without 60 votes, so you have to account for how that’s going to play out too. CBO is really going to tear its hair out over this brainstorm from Graham and Cassidy.

For a party that prides itself on paying attention to economics, unlike those spendthrift Democrats who think the law of supply and demand is just a suggestion, Republicans sure don’t want to pay attention to basic health economics. This stuff isn’t rocket science, either. Sure, the details are tricky, but the basics are pretty easy to follow. As near as I can tell, though, Republicans just don’t want to follow them. Why? I suppose because Obamacare mostly does follow them, so that makes them bad. Or something.