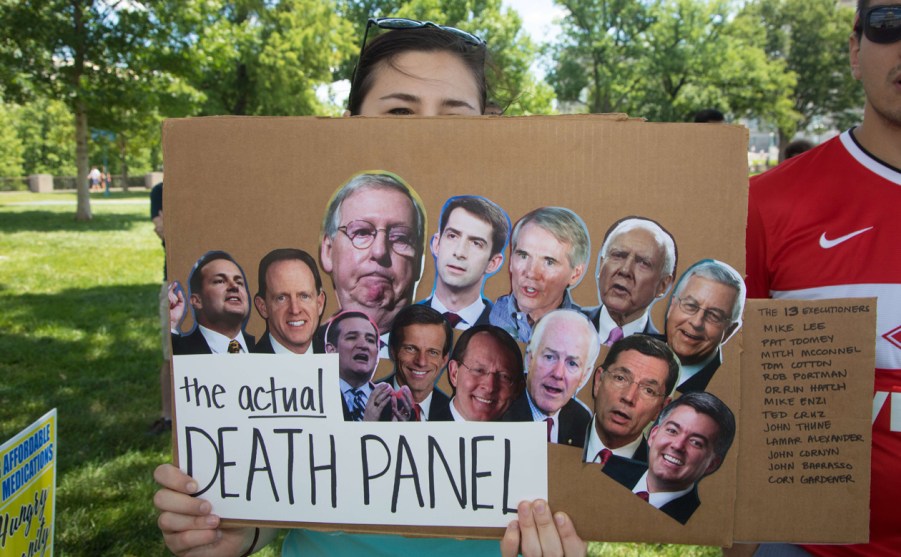 Congress is moving to prevent the Internal Revenue Service from enforcing one of the more unpopular provisions of the Affordable Care Act, which requires most Americans to have health insurance or pay a tax penalty.

The plan is separate from Republican efforts to repeal the health care law….In case that effort fails or bogs down, the House Committee on Appropriations has drafted a provision to stop the I.R.S. from enforcing the mandate. The restrictions, for the fiscal year that starts Oct. 1, are included in an appropriations bill that was approved on Thursday by the Subcommittee on Financial Services and General Government.

There’s more here than meets the eye. Sure, eliminating enforcement of the individual mandate would be politically popular, but that’s only part of the reason for this. You see, back in March the CBO handed Republicans an unpleasant surprise: it turns out that they take the individual mandate very seriously. Here’s what CBO’s analysis of the very first House health care bill says:

CBO and JCT estimate that, in 2018, 14 million more people would be uninsured under the legislation than under current law. Most of that increase would stem from repealing the penalties associated with the individual mandate.

What is “most”? CBO doesn’t say, but it’s probably 10-12 million. Add in a little bit more for the years after 2018, and elimination of the mandate is probably responsible for around 12 million or so out of the total 24 million who would be newly uninsured by the Republican bill.

CBO is required to base its estimates on current law. If Republicans do away with the mandate, that’s the baseline CBO has to use. So if Republicans fail this year but re-introduce a health care bill next year, CBO will compare it to a baseline in which the mandate doesn’t exist. This is a win-win for Republicans. If they fail to repeal Obamacare this year and decide to pack it in, killing the mandate is still good politics. But if they decide not to give up, it means their next bill will automatically get a much better score. Compared to a world where the mandate is already gone, their bill won’t take away insurance from 24 million, it will take it away from 12 million or so. Fiddle around with Medicaid funding and maybe you get that down to 5 million.

To you and me, that’s still a lot. But in newspaper headlines it’s far less dramatic. Bottom line: even if Republicans fail this year, Obamacare isn’t safe. Republicans can spend the next year sabotaging Obamacare¹ and giving some real thought to a new replacement bill. They’ve learned a lot about how CBO scores things, and that will allow them to craft a bill that’s carefully tailored to get the best possible score while still reducing taxes the maximum amount. No matter what happens with Trumpcare this year, the fat lady has definitely not sung.

¹As a bonus, killing the mandate helps with this. It mostly affects healthy folks who are buying insurance only because the law says they have to. Get rid of the mandate and they stop buying insurance. This will unbalance the Obamacare insurance pool even more and lead to premium increases for everyone else.