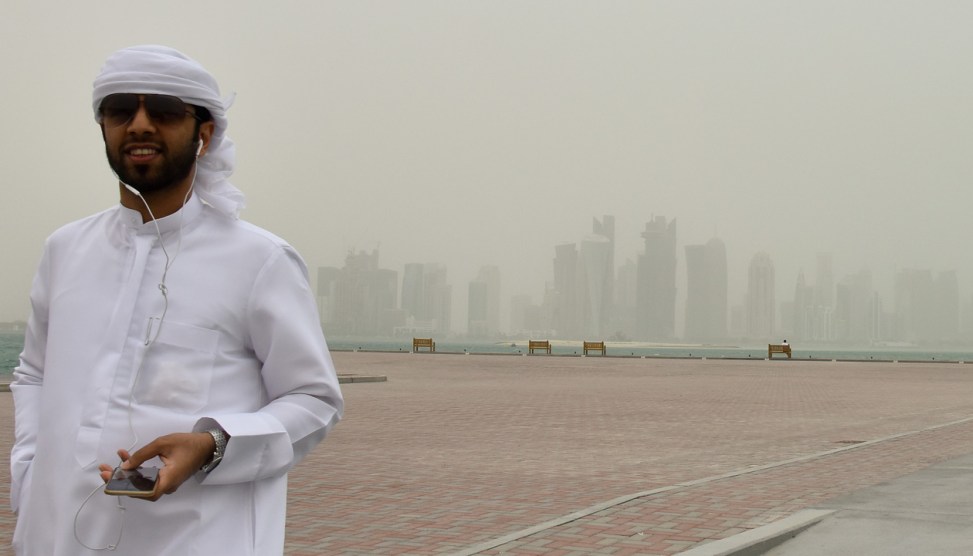 As you know, Saudi Arabia and other Gulf countries have imposed a blockade on Qatar, allegedly due to concerns over Qatar’s support for various and sundry terrorist groups. The blockade began in May, after Qatar’s official news agency published incendiary remarks from Qatar’s leader, and then claimed they had been hacked:

The Qatari state television’s nightly newscast…scrolling ticker…included calling Hamas “the legitimate representative of the Palestinian people,” as well as saying Qatar had “strong relations” with Iran and the United States. “Iran represents a regional and Islamic power that cannot be ignored and it is unwise to face up against it,” the ticker read at one point. “It is a big power in the stabilization of the region.”

Hacked? Get serious. Does anyone seriously believe that—

The United Arab Emirates orchestrated the hacking of Qatari government news and social media sites in order to post incendiary false quotes attributed to Qatar’s emir, Sheikh Tamim Bin Hamad al-Thani, in late May that sparked the ongoing upheaval between Qatar and its neighbors, according to U.S. intelligence officials.

Officials became aware last week that newly analyzed information gathered by U.S. intelligence agencies confirmed that on May 23, senior members of the UAE government discussed the plan and its implementation. The officials said it remains unclear whether the UAE carried out the hacks itself or contracted to have them done.

That’s from the Washington Post. The UAE denies everything, of course.

This is a very big deal. For starters, what are the odds that the UAE did this alone? Pretty slim, I think. Saudi Arabia was almost certainly involved too. And what does President Trump do now? He’s taken the Saudi side of this dispute, but now his own intelligence agencies are telling him that other Arab countries conducted the hack as a deliberate way of giving themselves an excuse to create the blockade. In fact, he probably learned this a week ago.

Someone in the intelligence community apparently decided that (a) Trump was never going to go public with this, and (b) it really needed to become public. But who? And why?