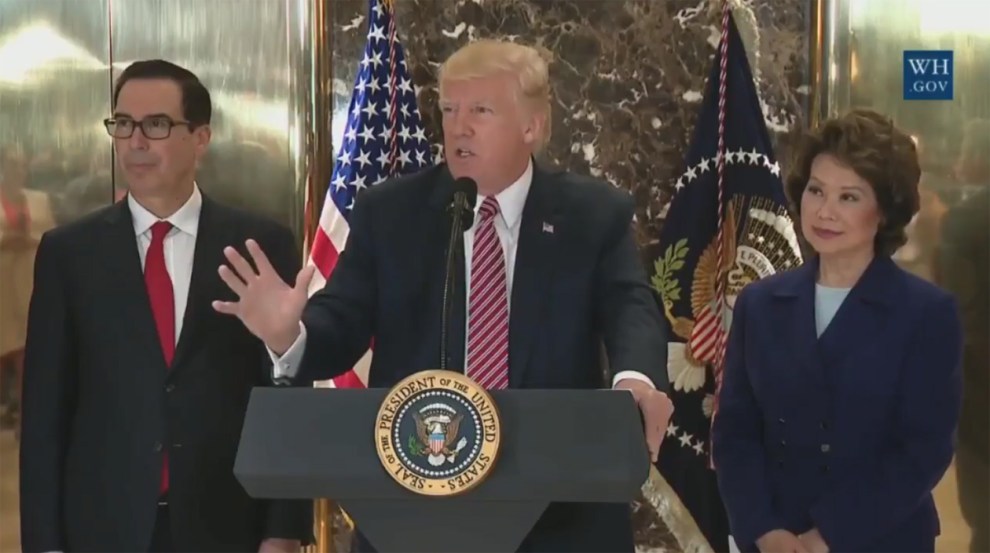 I want to know the facts….As I said — remember this, Saturday — “we condemn in the strongest possible terms this egregious display of hatred, bigotry and violence. It has no place in America,” and then I went on from there….So, making the statement when I made it was excellent.

“And then I went on from there.” Uh huh. Even though he was reading from a printed version of his remarks that he pulled out of his pocket, Trump somehow forgot the part where he said “on many sides, on many sides.” Trump didn’t condemn white nationalists, he just condemned violence and hatred in general. Next question: did he miss an opportunity to bring the country together?

Not at all. I think the country — look, you take a look. I’ve created over a million jobs since I’m president. The country is booming, the stock market is setting records. We have the highest employment numbers we’ve ever had in the history of our country. We’re doing record business. We have the highest levels of enthusiasm….I had to see the facts, unlike a lot of reporters — unlike a lot of reporters. I didn’t know David Duke was there. I wanted to see the facts, and the facts as they started coming out were very well-stated. In fact, everybody said, “His statement was beautiful. If he would have made it sooner, that would have been good.” I couldn’t have made it sooner because I didn’t know all of the facts.

The economy is doing great! So who cares if David Duke was there? Next question: what do you think of the alt-right? At this point, Trump is getting pretty red in the face:

What about the alt-left that came charging at the alt-right? Do they have any semblance of guilt? What about the fact they came charging with clubs in their hand? Do they have any problems? I think they do….Wait a minute, I’m not finished, fake news….You had a group on one side that was bad and you had a group on the other side that was also very violent, and nobody wants to say that.

Yeah, what about the counter-protesters? Nobody ever wants to say that the people who are against racism are really bad too. Luckily, Donald is around to speak truth to power. Next question: is the alt-left really equivalent to neo-Nazis?

But the neo-Nazis started it, right?

Um, but what about the rally on Friday night?

I looked the night before. If you look, there were people protesting very quietly the taking down of the statue of Robert E. Lee….You had a lot of people in that group that were there to innocently protest, and very legally protest, because I don’t know if you know, they had a permit, the other group didn’t have a permit…..There are two sides to a story.

That rally was organized by Richard Spencer, a leader of the alt-right. Here’s the Washington Post’s report:

“Stay in formation!” barked an organizer carrying a bullhorn. “Two by two! Two by two!” Within minutes, marchers lit their torches. Additional organizers, wearing earpieces and carrying radios, ran up and down the line shouting directions.

That sounds pretty quiet and innocent, all right. What a disgrace. And speaking of that, here’s the latest list of CEOs who have quit Trump’s manufacturing council:

If there’s a single name left on this list by the end of the day, their board should immediately fire them for gross stupidity and obtuseness.