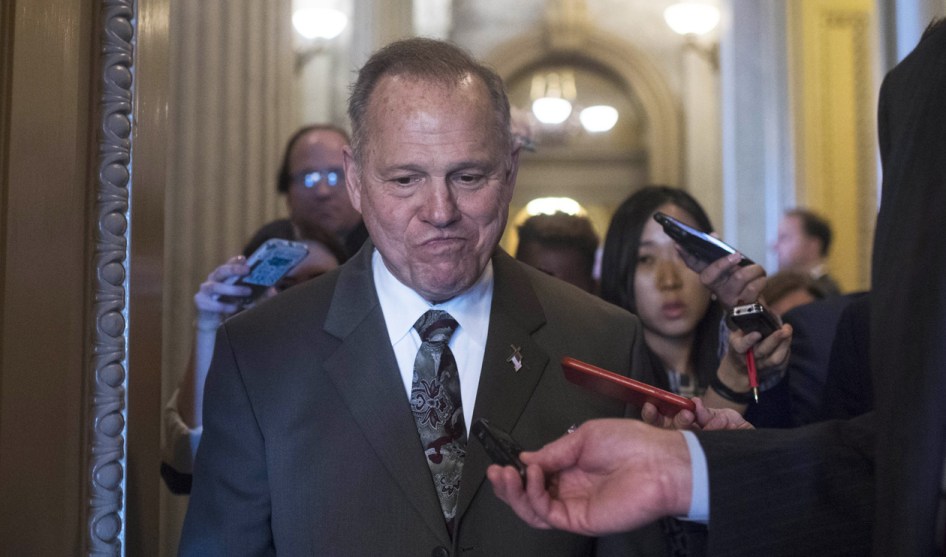 I’m late getting to this, but here’s the latest on Roy Moore:

A fifth woman has come forward to accuse former Alabama chief justice Roy Moore of inappropriate sexual conduct. Beverly Young Nelson, 55, said Moore, now a candidate for the U.S. Senate, assaulted her when she was a 16-year-old high school student working as a waitress in Gadsden, Ala.

….A few days before Christmas in 1977, Nelson said, she brought her high school yearbook into the restaurant and Moore asked if he could sign it. She said yes, and he wrote, “To a sweeter more beautiful girl I could not say ‘Merry Christmas.’”

….About a week or two later, Nelson said, Moore offered her a ride home. Unable to reach her boyfriend, who was supposed to pick her up, she accepted….But instead of driving to the highway, Nelson said, Moore drove to the back of the restaurant and began to grope her, putting his hand on her breasts and later squeezing the back of her neck, attempting to force her head toward his crotch. “I thought that he was going to rape me,” she said. “I was twisting and I was struggling and I was begging him to stop.”

As far as I can tell, the best rule of thumb for judging accusations like this has nothing to do with whether or not the man is generally an asshole. Plenty of assholes don’t engage in sexual abuse and plenty of sexual abusers are nice guys in other areas of their lives. Rather, it’s the number of women who come forward. Men who engage in sexual abuse or sexual harassment, whether with teenagers or adults, don’t usually do it only once. So if there’s only a single allegation, and the man denies it, I would probably remain tentatively skeptical. If there are multiple allegations—Bill Cosby, Harvey Weinstein, Donald Trump, Roy Moore, Louis C.K., etc.—then I’d take it as prima facie evidence of guilt unless there’s some pretty serious evidence to the contrary.

Obviously this isn’t a perfect heuristic, but I think it’s close. Mitch McConnell certainly seems to rely on it. Shortly before the press conference announcing Nelson’s allegation he declared, “I believe the women,” and told Roy Moore he should step down. He knows perfectly well that more shoes are likely to drop before Election Day.