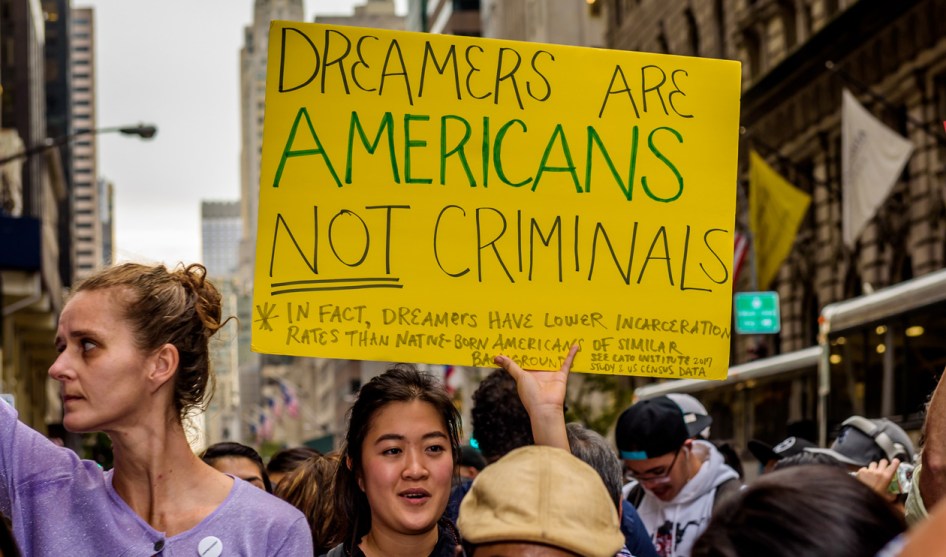 The Washington Post reports that the White House has an actual, concrete immigration proposal:

President Trump’s immigration proposal to Congress will include a path to citizenship for an estimated 1.8 million young undocumented immigrants….The figure represents a significant concession to Democrats but is likely to produce sharp blowback among conservative Republicans.

….Trump’s plan, which will be formally sent to the Senate on Monday, also includes a $25 billion “trust fund” for a border wall and additional security upgrades on both the southwest and northern U.S. borders. And the president will propose significant curbs to legal immigration channels, restricting the ability of U.S. citizens to petition for visas only for spouses and minor children and ending categories for parents and siblings. Both of those provisions are likely to engender fierce objections among liberal Democrats.

There’s nothing here about eliminating the visa lottery, but I’m sure that will be in Monday’s proposal as well. The bigger question is whether Trump’s plan really will follow this outline, or if a bunch of other deal-killing details will be tossed in by the time it finally gets committed to paper.

I don’t think enough Democrats would support this to allow it to pass. But if it’s for real, it’s not a terrible starting point. Current negotiations in the Senate have broken down over a path to citizenship for Dreamers, but Trump has now weighed in very strongly on not only providing that path, but doing it for more than twice as many Dreamers as the 700,000 that have been under discussion before this. This will be a pretty good test of whether Trump truly has any policy influence over Republican members of Congress. If he does, the path to citizenship won’t be a stumbling block anymore.

I guess I should probably add my usual caveat here: Trump’s proposal seems like a decent starting point to me because I’m not part of the far left on immigration. I’m no fan of major immigration restrictions, but neither do I think they’re the end of the world. To me, the bigger issue isn’t so much that this proposal is draconian, but that it might eliminate too many bargaining chips for a future comprehensive reform. If conservatives already have most of what they want, what incentive do they have to negotiate a plan that provides some kind of legal status for the 8-9 million undocumented immigrants who aren’t Dreamers?