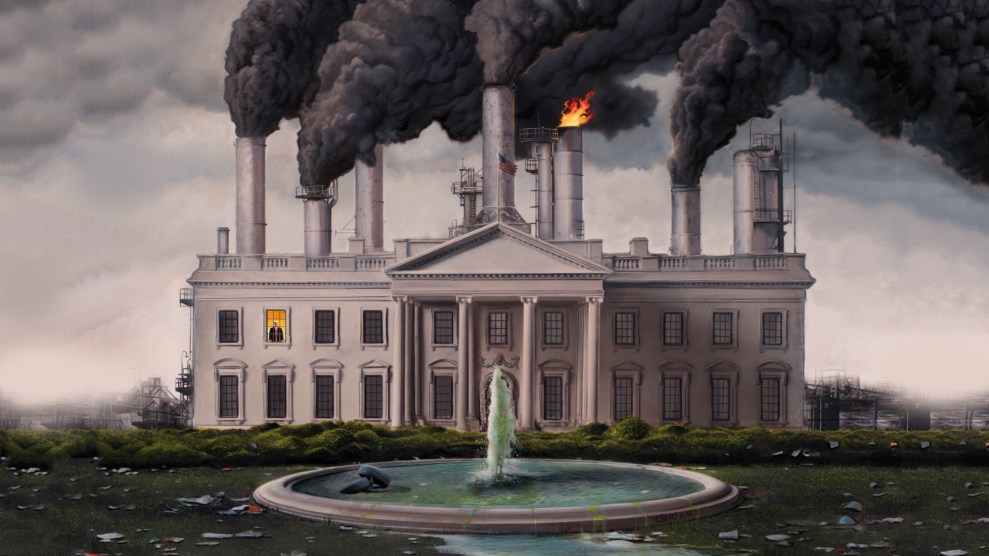 Those of us of a certain age will remember the dynamic duo of James Watt and Anne Gorsuch during the Reagan years. As Secretary of the Interior and administrator of the EPA, respectively, they did everything they could to make America friendly to polluters in particular and corporate interests in general. In the end, Watt resigned after mocking a coal-leasing panel (“I have a black, a woman, two Jews and a cripple. And we have talent.”). Gorsuch resigned after being held in contempt of Congress for refusing to turn over Superfund records.

Today we have Ryan Zinke and Scott Pruitt. Zinke has already slashed the size of two beautiful national monuments and gotten in trouble over his travel habits. Scott Pruitt, meanwhile, has been busy rescinding the Clean Power Plan and getting in trouble over his travel habits—and much more. In fact, Pruitt is so bad that Rebecca Leber’s profile of him, “Making America Toxic Again,” is on the cover of our current issue. Here’s a bit of it:

Another accomplishment on Pruitt’s list was “science board transparency”—a reference to one of the more obscure ways in which well-established facts have come under relentless assault….On Halloween, to an audience that included few reporters but several industry reps—including Steve Milloy, the former policy and strategy director of Murray Energy and a prominent climate denier—Pruitt announced a new plan. No scientist who received agency grants could serve on the boards.

….To replace the departing scientists, Pruitt appointed industry supporters, including Michael Honeycutt, a toxicologist from the Texas Commission on Environmental Quality who has built his career arguing that the impacts of air pollution are overstated. He is now the chair of the Science Advisory Board. Pruitt picked more than a dozen people to fill the empty seats of the 18-member Board of Scientific Counselors and 15 others for the 47-member Science Advisory Board, many of them former executives and staffers from organizations that have a stake in limiting the EPA’s chemical and air quality work, such as the utility Southern Co., Phillips 66, Total, and the American Chemistry Council.

All of this leads up to Pruitt’s latest effort to make America not just toxic, but specifically toxic to children:

A federal environmental program that distributes grants to test the effects of chemical exposure on adults and children is being shuttered amidst a major organization consolidation at the Environmental Protection Agency. The National Center for Environmental Research (NCER) will no longer exist following plans to combine three EPA offices, the agency confirmed to The Hill on Monday.

….The NCER is largely known for the funding it provides through its premiere program, Science To Achieve Results (STAR). Under the STAR program, grants are given to the Children’s Environmental Health and Disease Prevention Research Centers, which were established in 1988 to discover methods to reduce children’s health risks from environmental factors….A report released by the National Academy of Sciences last year that was compiled at the EPA’s request championed the STAR program for its “numerous successes.”

You can see the problem, of course. The STAR program has been successful. That means it identifies chemicals that might be harmful to children. And that in turn means trouble for the companies that make those chemicals. We can’t have that, can we?

I don’t remember who said this last night about the Trump administration, but it’s as if they’re in a contest to see who can be the most evil. For the moment, it looks like Pruitt is in the lead.