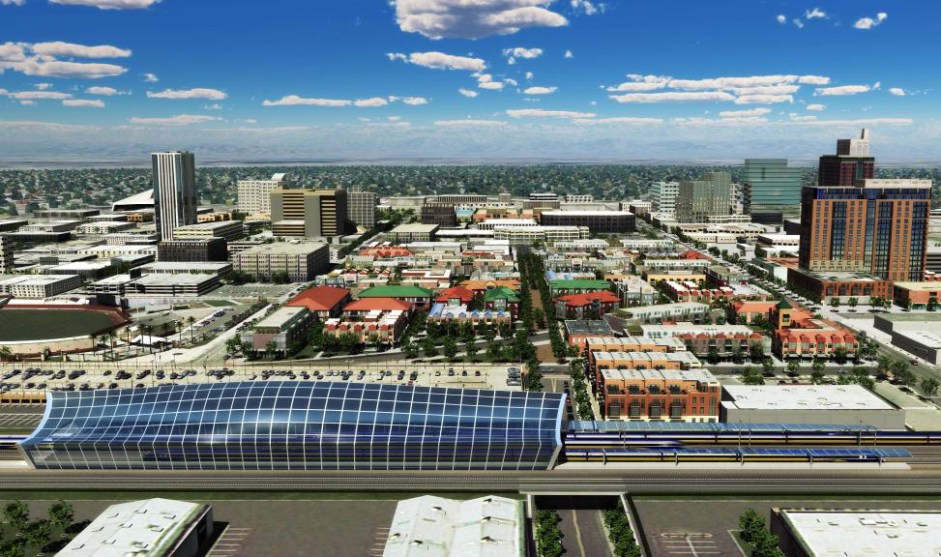 Artist's rendering of the Fresno HSR station. The boomtown of a revitalized Fresno is in the background.California High Speed Rail Authority

I read something alarming today on the front page of the LA Times:

If Lt. Gov. Gavin Newsom is elected governor as expected, he’ll keep building the state’s two contentious public works projects: the bullet train and twin water tunnels. But he’ll scale back both….Newsom will concentrate on completing a high-speed rail line from the San Joaquin Valley to the San Francisco Bay Area. The southern half of the ambitious project, from the valley into Los Angeles, will be delayed until the initial line proves to be financially feasible and can attract more money from taxpayers or private investors.

Wait. He’s going to build a 150-mile HSR from Fresno to San Francisco? That’s insane. It’s about a 2-3 hour drive and it’s not exactly a congested route: Fresno has a population of only 500,000 and it’s hardly a hotbed of commuter service to the Bay Area. There are a grand total of four daily flights to San Francisco and none to San Jose. Modesto and Stockton add another 500,000 potential riders to HSR-North, but they’re literally only an hour from the Bay Area. This is going to be a ghost train.

I’m not a fan of California’s bullet train, but even I agree that it’s all or nothing: the train doesn’t make even a tiny bit of sense unless it connects the state’s two big population centers. It either goes from LA to San Francisco or it goes nowhere. In this case, building half a bullet train is like building half a skyscraper: it’s worse than building nothing at all.