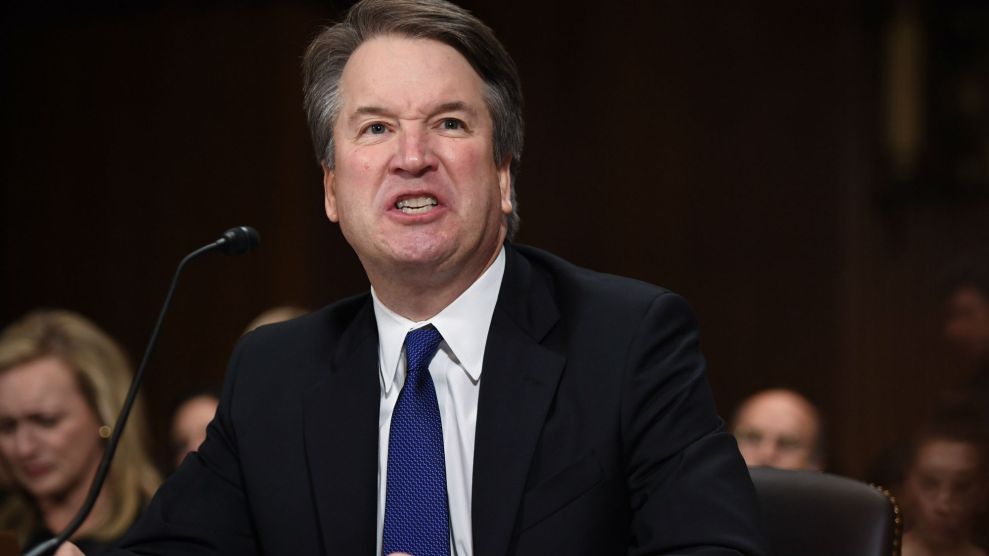 This is from the afternoon session of the Brett Kavanaugh hearings last week:

ORRIN HATCH: When did you first hear of [Deborah] Ramirez’s allegations against you?

KAVANAUGH: In the last — in the period since then, the New Yorker story.

Ramirez is the woman who says that Kavanaugh exposed himself to her during a drinking game while they were both at Yale. Kavanaugh denies this ever happened and says that he learned about Ramirez’s allegation only after it was published in the New Yorker last Sunday.

NBC News, however, has gotten hold of a series of text messages between Kerry Berchem and Karen Yarasavage, both of them personal friends of Kavanaugh, that suggest Kavanaugh has been aware of the Ramirez allegation for quite a long time:

In a series of texts before the publication of the New Yorker story, Yarasavage wrote that she had been in contact with “Brett’s guy,” and also with “Brett,” who wanted her to go on the record to refute Ramirez. According to Berchem, Yarasavage also told her friend that she turned over a copy of the wedding party photo to Kavanaugh, writing in a text: “I had to send it to Brett’s team too.”

….The texts show Kavanaugh may need to be questioned about how far back he anticipated that Ramirez would air allegations against him. Berchem says in her memo that Kavanaugh “and/or” his friends “may have initiated an anticipatory narrative” as early as July to “conceal or discredit” Ramirez.

All the business about Kavanaugh’s drinking, which has absorbed everyone’s attention for the past week, was never going to go anywhere. He may have done his best to downplay how much he drank, but that’s a political misdemeanor. It almost certainly wouldn’t have derailed his nomination.

However, if it turns out that Kavanaugh (a) reached out to potential witnesses weeks ago regarding allegations of misconduct and (b) lied to the Senate about when he first heard about these allegations, then he’s toast. The question, of course, is whether Bercham is telling the truth. Bercham told NBC that the FBI has so far been uninterested in talking to her, but I imagine that’s about to change.