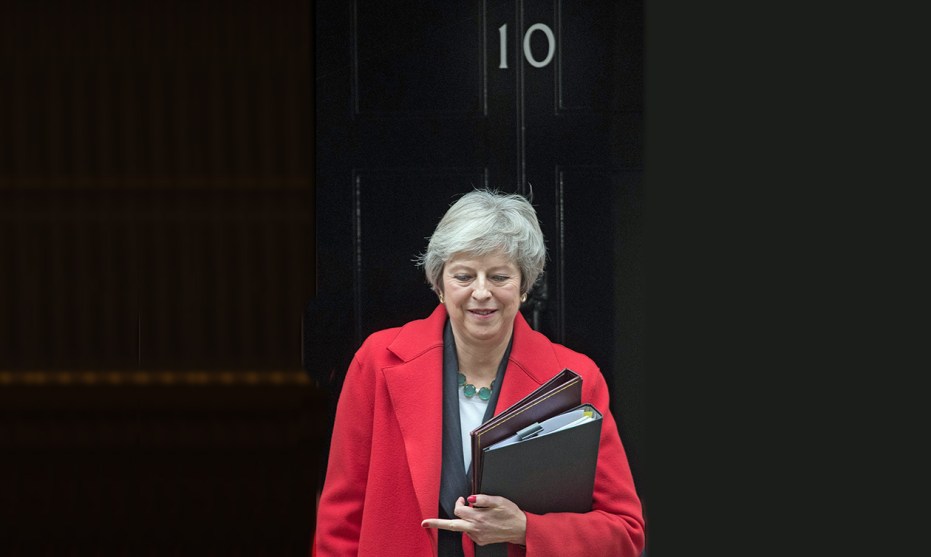 Is Theresa May sending us all a message? Or is her left hand just momentarily in an unfortunate position?Stefan Rousseau/PA Wire via ZUMA

It’s been a tough week for British prime minister Theresa May. On Friday she called Donald Trump to congratulate him on his election victory, but didn’t realize that he had moved on from pretending he won big and was now in temper-tantrum mode over his big loss. So her congratulations just set him off, and he spent the next few minutes berating her over whatever came to mind. “May has endured Trump’s churlish temper before, but still her aides were shaken by his especially foul mood, according to U.S. and European officials briefed on the conversation.”

Anyway, Brexit was one of the topics Trump brought up—presumably because it’s one of the two or three things he knows about Great Britain—and May assured him it was under control. And it was! On Tuesday May announced that she’d reached a 585-page agreement with the EU, and on Wednesday her cabinet approved it.

But wait. Then on Thursday two cabinet ministers resigned, including the minister responsible for negotiating Brexit with the EU. WTF? Did they announce their intent to resign during the cabinet meeting itself? Or did they just grumble and go along, and then resign the next day? Just how dysfunctional is British politics, anyway?

Anyway, the whole deal appears to be…nothing much. The border with Ireland stays open, which means the entire UK kinda sorta stays in the customs union. Britain also kinda sorta keeps all the EU’s social, environmental and labour regulations. It also kinda sorta confirms the rights of current EU and British citizen to continue residing outside their home country—for a while, anyway. But Britain loses full access to EU financial markets and will have to pay $50 billion for forcing the EU to go through with all this nonsense.

On the bright side, Brits will once again have blue passports, and tariffs on fish will remain.

I realize that no American citizen has the moral high ground to complain about idiotic politics, but jeez. Just find some excuse to call for a second referendum, vote Brexit down this time, and get on with things. This is ridiculous.