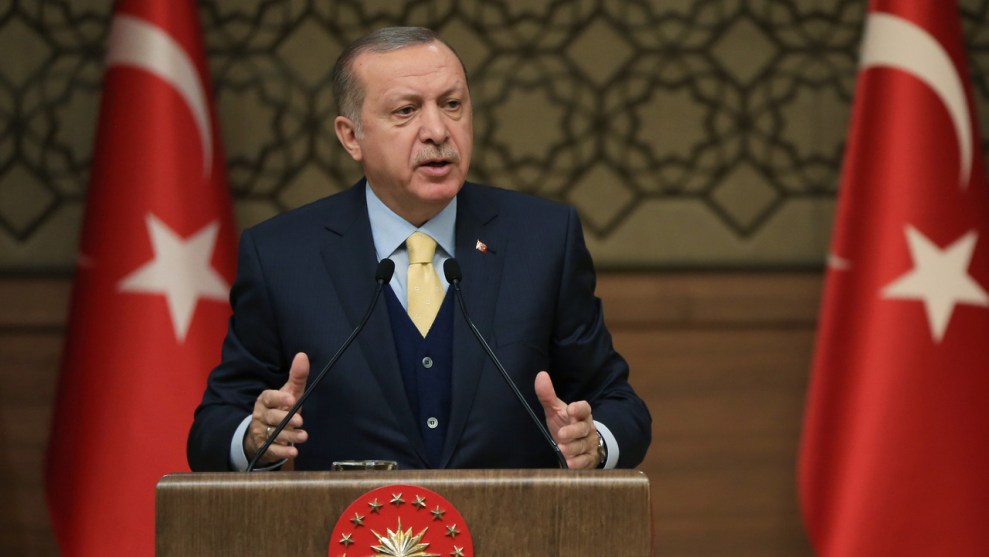 Does the name Fethullah Gulen ring a bell? Maybe not. Gulen is a 77-year-old Turkish cleric who has been a resident of the United States for the past 20 years—and who has been a mortal enemy of Turkish president Recep Tayyip Erdoğan for the past five years or so. The question of just what Gulen and his movement of Gulenists have been up to during that time is complicated, but what matters for now is that, rightly or wrongly, Erdoğan is convinced that Gulen wants to overthrow his government and was behind the failed coup attempt of 2016. Erdoğan would like Gulen extradited from the US, but has been unable to get the Justice Department to agree thanks to his thorough inability to produce credible evidence that Gulen is responsible for any kind of terrorist activity. Because of this, Gulen continues to cool his heels in his Pennsylvania home.

That’s the nickel background—but I’ll add one more thing you might have forgotten about. A year ago the Wall Street Journal passed along a remarkable story about Michael Flynn, the crackpot National Security Advisor appointed by Donald Trump in late 2016 and then fired in early 2017. According to the Journal, Flynn and his son met in 2016 with some associates of Erdoğan who proposed to pay the Flynns $15 million to secretly kidnap Gulen and fly him to Turkey. This was in September, while Flynn was a top campaign surrogate for Trump. A second meeting was held in December, after Flynn had already been appointed NSA.

Now, is this kidnapping story for real? We’ll probably never know for sure. But keep it in mind as you read this from NBC News:

The White House is looking for ways to remove an enemy of Turkish President Recep Erdoğan from the U.S. in order to placate Turkey over the murder of journalist Jamal Khashoggi, according to two senior U.S. officials and two other people briefed on the requests. Trump administration officials last month asked federal law enforcement agencies to examine legal ways of removing exiled Turkish cleric Fethullah Gulen in an attempt to persuade Erdoğan to ease pressure on the Saudi government, the four sources said.

The effort includes directives to the Justice Department and FBI that officials reopen Turkey’s case for his extradition….“At first there were eye rolls, but once they realized it was a serious request, the career guys were furious,” said a senior U.S. official involved in the process.

So. The Saudis murder a critic of their regime on Turkish soil.¹ Trump declines to do or say much about it, which naturally pisses off Erdoğan. Trump has to come up with a plan to deal with this, and apparently taking the murder seriously is out of the question. Instead he concocts a crazy scheme to bypass the career officials in the Justice Department and simpy order Gulen to be extradited whether he’s guilty of anything or not.

By the way, this would effectively be a death sentence for Gulen. Welcome to Trumpocracy.²

²One of the problems with this whole affair is that there are no good guys. Trump, Erdoğan, and Crown Prince Mohammed bin Salman of Saudi Arabia are all despots or wannabes with hardly any redeeming features, while Gulen is something of a mystery. That makes it easy to shrug and write the whole thing off as a kind of gangland feud between Turkey and Saudi Arabia, but you shouldn’t. Trump’s actions are reprehensible no matter what, and one of his worst character faults is his relentless attempt to treat the Justice Department as a personal fiefdom dedicated to defending Donald Trump and taking revenge on Donald Trump’s enemies. This needs to be exposed and stopped at every possible opportunity.