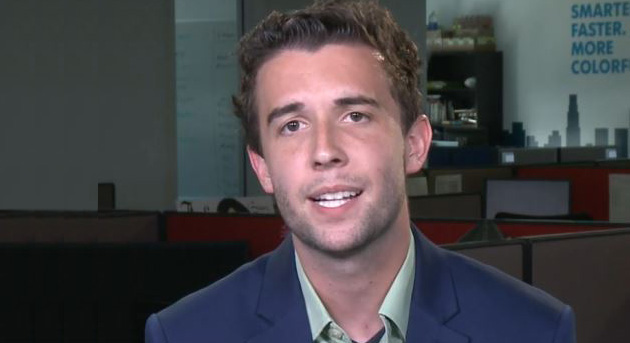 Here’s an entry from my once-in-a-blue-moon series “I Agree With a National Review Writer.” It’s my way of showing that we could all get along if only we’d restrict ourselves to a tiny subset of the political issues that divide us.

You may have heard that Oklahoma quarterback Kyler Murray won the Heisman Trophy on Saturday. Good for him! — although personally I thought Alabama quarterback Tua Tagovailoa should have gotten the nod. But shortly after his win, the entire country learned that he had written some homophobic tweets and he was forced to apologize for them.

I was busy and didn’t really know about this until this morning, when I read that the tweets were six years old. Six years old? The guy is a sophomore. So, um, subtract 19 and carry the four and he was—

Fourteen years old when he wrote those tweets. That’s eighth grade, isn’t it? Without any kids of my own, I’m a little fuzzy on this. Anyway, here is Charles Cooke:

All shame to Scott Gleeson, of USA Today, who waited until the exact moment that Murray had been selected for the award before amplifying a national shaming campaign that had been built atop a handful of tweets that Murray wrote when he was 14….Gleeson’s story begins with these words:

Ah, I see. It was Murray’s “memorable night” that “helped resurface social media’s memory of several homophobic tweets more than six years old,” and not, say, Scott Gleeson — and others in the press — who decided to run with the story and hype it all around the Internet. How tough it must be to serve as a bystander to your own work!

….What, one has to ask, is the public interest angle here? Fourteen-year-olds say stupid things constantly. Yes, all of them. What possible good can it do to punish them as adults for the thought crimes they committed as minors? Had Murray committed an actual crime — say, shoplifting or joyriding or the like — it would likely have been expunged from his record when he reached the age of majority, especially given how impressive a young man he has become in the interim. And even if it hadn’t, the press would likely have been circumspect about bringing it up. But tweets? Apparently, we just Have to Know — and on the day of his triumph, to boot.

Cooke is right. This stuff has gotten way out of hand. It’s one thing if we’re dealing with adults. Or if the tweets are a year old. Or if they reveal something truly newsworthy. But dumb anti-gay tweeting from a 14-year-old? Back in 2011? Come on. This accomplishes nothing except to convince people that the cultural tolerance movement has completely jumped the shark. Knock it off.