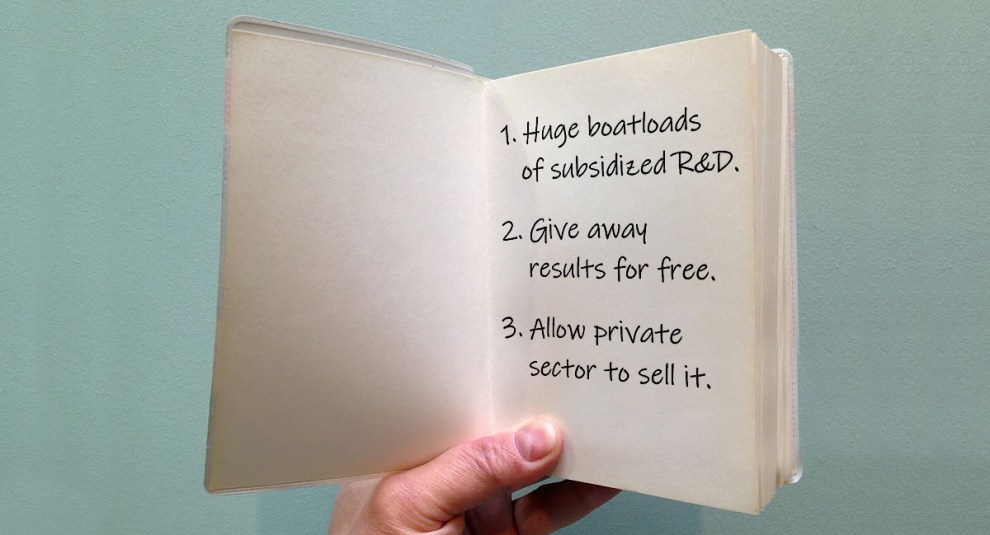 Let’s noodle some more about climate change today. On Thursday I regaled you with my abridged Green New Deal. It’s still fine, but I think it can be abridged even more. Bear with me here.

First off, I want to acknowledge that for all the infighting in liberal circles, the real problem is that full-scale climate denialism has taken over the Republican Party. This is what’s keeping us from making serious inroads into carbon emissions. In Europe, by contrast, there is no equivalent to the Republican Party. Nobody denies that climate change is real, and there’s no monolithic political opposition to doing something about it. As a result, over the past two decades Europe has been far more successful at reducing carbon emissions than the United States:

Wait. What’s going on here? In fact, the United States has reduced per-capita carbon emissions slightly more than Europe, and neither one has managed much reduction at all except when they’re forced to.¹ Nearly all of the reduction since 2000 came during the five-year period when oil prices spiked and the Great Recession killed off economic activity.

In other words, it doesn’t seem as if either the Republican Party or America’s dysfunctional politics is really the problem. So what is? It must be something common to both Europe and the US, and the obvious answer is that we all live in democracies. Roughly speaking, our governments do what the public wants, and the public doesn’t have much interest in reducing carbon emissions. Oh, we say we do, and we’ll support minor things like ETS or CAFE that have a barely noticeable effect on us. We’ll support solar power—if it produces electricity nearly as cheaply as coal. We’ll all buy electric cars—but only when the price comes down and the batteries get better. We’ll check out the energy star rating the next time we buy a new refrigerator. And that’s about it.

As for the rest of the world, I won’t even show you the chart. It’s too depressing. Outside of Europe and the US, carbon emissions are just going steadily up, up, up. Even the Great Recession barely made a dent. For the world as a whole, carbon emissions have increased more than 20 percent in the past two decades as poor countries try to catch up to the living standards of the West.

This is one reason I don’t really care one way or the other about the Green New Deal. Here is how Dave Roberts describes it:

The GND resolution is not a policy or a series of policies. It is a set of goals, aspirations, and principles. It purposefully puts the vision up front and leaves the policymaking for later.

Precisely. It’s just a bunch of goals: “net zero” greenhouse emissions and 100 percent renewable power via a “10-year mobilization”; a 40-60 percent reduction in global carbon emissions by 2030; “millions” of new green jobs; etc. These are familiar goals. We all know them and we all support them—but only as long as nobody is rude enough to talk about what it would take to actually meet these goals. The GND certainly doesn’t. That’s because the folks who wrote it know perfectly well what would happen if it did: it would die instantly.

None of what I’m saying should be even slightly controversial. Outside of war, I can’t think of an example in all of human history where a large polity—let alone the entire world—willingly made significant sacrifices in service of a fuzzy, uncertain hazard that’s decades away. We are overclocked hairless apes who are simply not designed to think that way. Why would anyone deny this?

The only such plan I can think of is one that increases global R&D spending on climate mitigation by, oh, 10x or so. Maybe 20x if it’s feasible. This money would be spent on developing new sources of clean energy and energy storage; reducing the price of current sources of clean energy; figuring out ways to remove carbon from the atmosphere; and pretty much anything else that seems remotely useful. The fruits of this research would be turned over to the private sector for free, and they would then compete to sell it all over the globe. This would harness human selfishness instead of fighting it. It’s not guaranteed to work, but unlike the GND and similar manifestos, at least it’s not guaranteed to fail.

POSTSCRIPT: Just to make something absolutely clear, I’m not in any way opposed to taking additional steps to address climate change. In fact, I’m all in favor of trying to scare the hell out of people about just how bad climate change is likely to be. I think the goals of the GND are great. I’m all in favor of ETS and CAFE and the Paris Accords. They don’t accomplish a lot, but they accomplish something, and every little bit helps. I just wouldn’t count on the public ever supporting strong enough versions of this stuff to prevent a catastrophic future.

¹This chart shows relative declines, but Europe’s emissions were far lower than the US at the start and are still far lower today in absolute terms. However, almost none of this has to do with policies aimed at climate change, which are fairly recent. Europe’s per-capita emissions have been lower all along because (a) the modern EU contains a lot of fairly poor countries which have low GDPs and therefore low carbon emissions, (b) even rich European countries generally have lower GDPs than the US, and (c) automobile usage is lower thanks to big taxes on gasoline. Those taxes, and the European devotion to small cars, were a result of postwar policies designed to reduce gasoline use decades before anyone had ever uttered the words climate change.