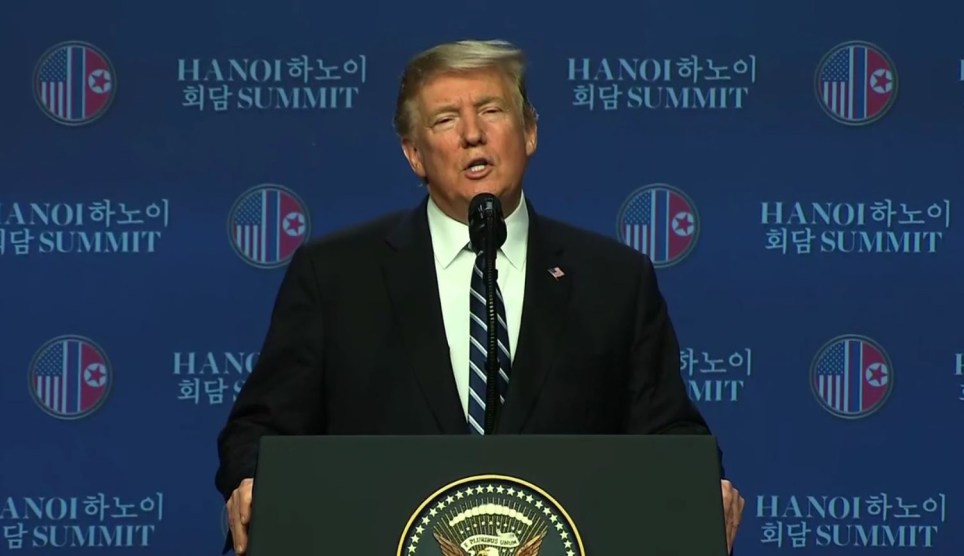 The Hanoi summit is over early and President Trump says no agreement was reached. “There is a gap,” he said, and the gap is that Kim Jong-un wanted all sanctions on North Korea lifted but was not willing to eliminate his nuclear arsenal in return. Trump was very vague about this, saying that Kim was willing to “denuclearize large portions of the areas we wanted”—whatever that means—but this was not enough to justify ending the sanctions. I wouldn’t take this to mean very much. On the contrary, my guess is that Kim wouldn’t agree to reduce his existing nuclear arsenal at all.

“We could have signed an agreement but I didn’t think it would be appropriate,” Trump said—though that sounds like a typical Trump lie. Kim left the summit quickly without doing even a joint press appearance with Trump, and that doesn’t suggest a super amicable walkaway no matter what Trump and Mike Pompeo say.

This abrupt ending to the summit doesn’t speak well for Pompeo’s negotiating team either. Whatever happened in that final negotiating session, it’s obvious that neither side was prepared for it. Normally, if talks break down you have at least a few small objectives in the bag that both sides can agree to in a public ceremony. The fact that this didn’t happen means that either the prep for this meeting produced literally nothing or else that Kim was so unhappy about the sanctions that he stalked out when it became obvious they would continue.

And that’s it. Trump ended the press conference in typical style, blaming his failure on previous presidents who “did nothing, absolutely nothing.” Charming to the end.