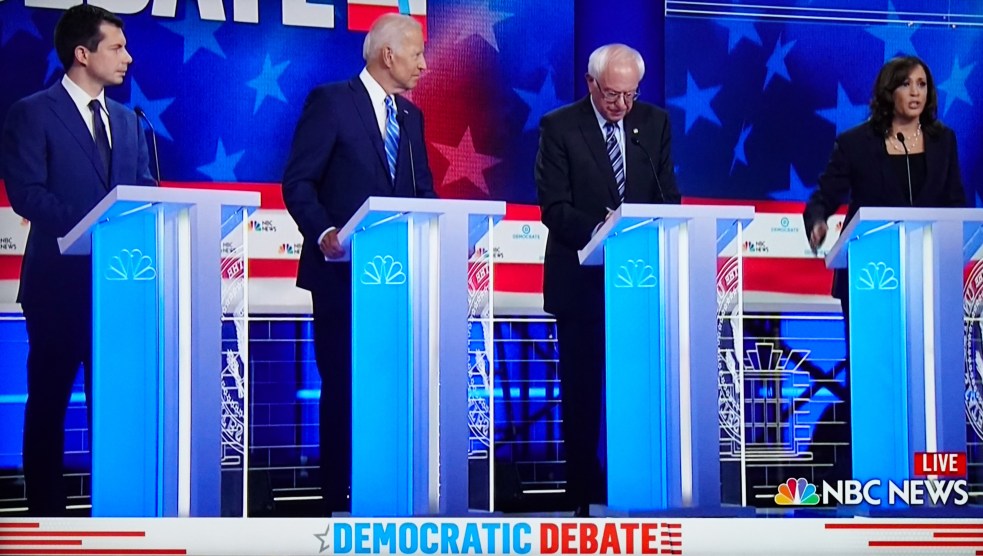 I didn’t have a strong reaction to tonight’s debate. The three candidates who commanded the stage best were Biden, Harris, and Sanders, but I didn’t feel that any of them decisively beat the others. Biden seemed a little too laundry-listish and Sanders was Sanders. So if you put a gun to my head, I guess I’d say Harris had the best night. Here are some other miscellaneous observations:

Unlike last night, Donald Trump came up constantly tonight. I assume no one is surprised that everybody on stage thought he was a very bad president?

Please, can we never again have a “go down the line and just one or two words from each of you” question?

Once again, no one seemed willing to get into much detail on climate change. I suppose that’s normal for a campaign, but for a bunch of folks who all agree that climate change is an existential threat, it’s a little spineless that they aren’t even willing to endorse a carbon tax.

I hate to say this, but Joe Biden seemed to have a bit of a hard time finding the words he wanted to find. It wasn’t a good look for someone whose biggest negative is his age.

Did Kamala Harris come across as passionate or angry? I’m not sure. However, I think she wins the zinger contest with her (undoubtedly preplanned) quip about how viewers don’t want a food fight, they want to know who’s going to put food on the table.

However, Pete Buttigieg gets a strong second place for his response to which country he’d talk to first: “Well, we don’t know who we’ll piss off the most over the next two years.”

UPDATE: As usual, I wrote all this before listening to any other commentary. Now, after listening to a bit of it, it appears that the MSNBC folks think the highlight of the debate was Kamala Harris going after Joe Biden for (supposedly) telling us what great people those old Southern segregationist senators were. I guess I just react differently to this kind of stuff. To me, it seemed rehearsed and fake, not genuine outrage.

But that’s just me.