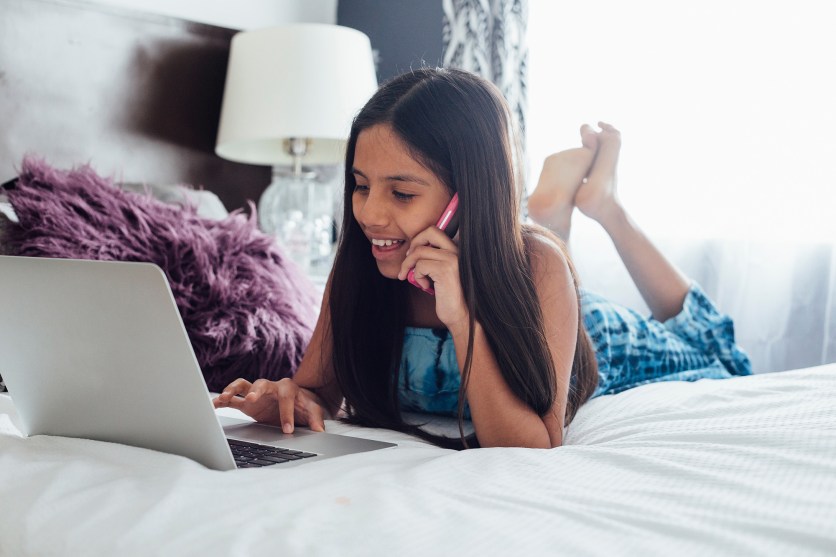 What, yeah, I'm totally doing my homework. I'm not sure. Maybe history?Ashley Corbin-Teich/Image Source via ZUMA

The Wall Street Journal reports that parents are starting to have a few wee concerns about digital classrooms:

When Baltimore County, Md., public schools began going digital five years ago, textbooks disappeared from classrooms and paper and pencils were no longer encouraged. All students from kindergarten to 12th grade would eventually get a laptop, helping the district reach the “one-to-one” ratio of one for each child that has become coveted around the country. Teaching apps and digital courses took the place of flashcards and notebooks.

Despite the investment, academic results have mostly slipped in the district of about 115,000 students. Over the last decade, American schools embraced technology, spending millions of dollars on devices and apps, believing its disruptive power would help many children learn faster, stay in school and be more prepared for a competitive economy. Now many parents and teachers are starting to wonder if all the disruption was a good idea.

Did educators and parents really believe that laptops and tablets and proprietary software would help kids learn faster? If so, did they have even the slightest evidence that this was true? It sure seems unlikely to me. My offhand guess is that it makes no difference, and my backup guess is that it might harm learning. Do we really want kids associating learning with the same device that they use to play games, watch videos, chat on Facebook, and compare Juul flavors? I fully understand that I’m a dinosaur, but I think learning should be associated with a separate, serious environment that is explicitly dedicated to doing things that might be hard.

But I suppose I’m wrong.