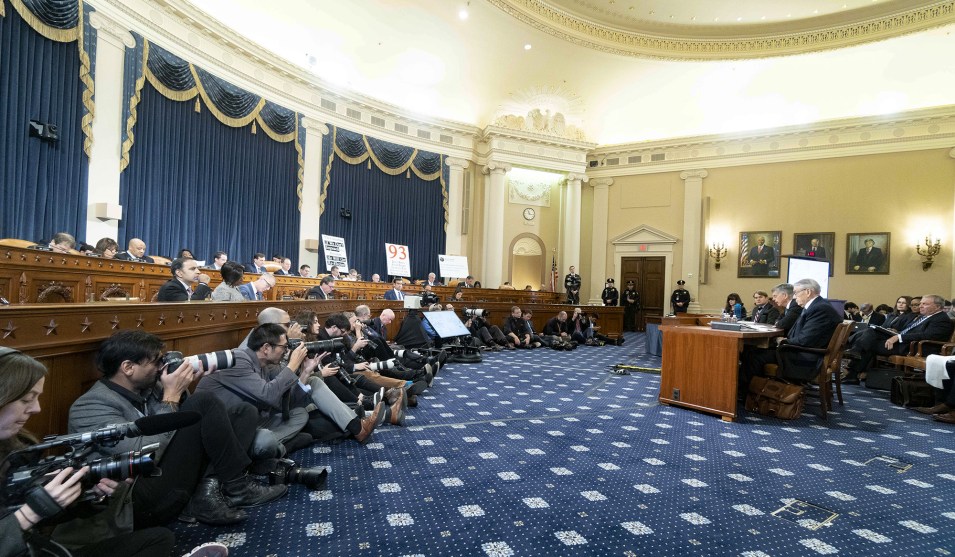 Ambassador William Taylor testifies on the first day of impeachment hearings, with dumb signs by Devin Nunes hovering in the background.Douglas Christian/ZUMA

Ed Kilgore suggests that if impeachment hearings drag on, delaying a Senate trial until January, it could be a problem for senators who are running for president and would rather be in Iowa that month:

An impeachment trial doesn’t allow for time off to do campaign events: The Senate rules require that once the trial begins, it must stay in session six days a week (Burr suggested a daily schedule running from 12:30 to 6:30). Perhaps some senators think they could make more hay at an impeachment trial than they could hitting the potluck circuit in Iowa or working street corners in New Hampshire.

….Unfortunately, the current Senate rules compel virtual silence from senators during the trial itself, though they are free to run their mouths before it begins and after it ends. During the trial, unless precedents are ignored, all senators get to do is to send written questions to be posed by the House managers or the president’s attorneys, and then stand up and vote “guilty” or “not guilty” when the deal goes down. Not much room for showboating there.

In any case, I’ve been convinced for a while that retail politics is dead in presidential races, and Donald Trump put a final nail in that coffin in 2016. Elizabeth Warren can hold a few big rallies during days off from the trial, and can also appear on TV to her heart’s content. That matters more than yet another visit to the selfie line in Calhoun County.

There’s no reason to rush things. Let the facts come out. Let Republicans continue to embarrass themselves. Allow topics other than Ukraine to get some air time. The primary goal at this point is to persuade the public, and that always takes time. So go ahead and take some time.