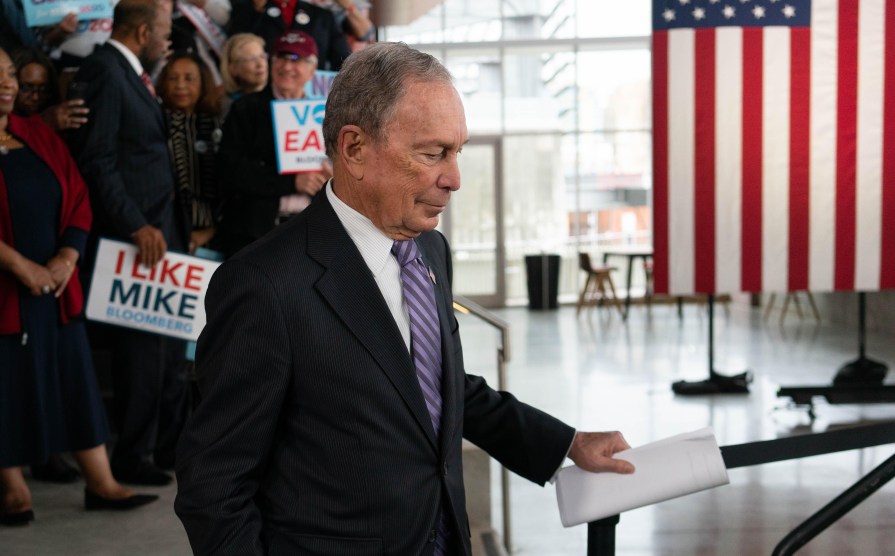 Sure, this guy likes Mike now. But will he still like Mike a week from now?Mehmet Demirci/ZUMA

Former Mayor Michael R. Bloomberg of New York has qualified for Wednesday’s debate in Las Vegas, the first time the billionaire will appear onstage alongside his Democratic presidential rivals.

A national poll from NPR, PBS NewsHour and Marist released on Tuesday showed Mr. Bloomberg with 19 percent support among Democrats….The survey was the fourth national qualifying poll since mid-January that showed Mr. Bloomberg with at least 10 percent support, enough to earn him an invitation to the debate stage before the deadline of 11:59 p.m. Eastern time on Tuesday.

Bloomberg has spent a gazillion dollars to achieve this result, which demonstrates two things. First, name recognition matters. Second, a lot of Democrats just aren’t very happy with the set of candidates they have to choose from at the moment.

But money only goes so far. Ask Hillary Clinton. Name recognition only goes so far. Ask Joe Biden. And random dissatisfaction and curiosity only go so far. Ask Herman Cain and Ben Carson. Plenty of people have been in the position Bloomberg is in, and plenty of them have then imploded when they finally left their bubble and were forced to unmask themselves to a national audience. Bloomberg may genuinely appeal to Democrats yearning for a centrist candidate, but for everyone else he has so many soft spots it’s hard to count them.

He’s a billionaire. He supported the Iraq War. He endorsed George W. Bush. He’s the face of stop-and-frisk. Women have accused him of misogynistic comments. He backed the New York Police Department’s campaign to spy on Muslims in the aftermath of 9/11. He has no idea what caused the Great Recession. He opposed the Iran deal. He’s a strong backer of Israel. And that’s just the tip of the iceberg. There are plenty of national policies that never get any play at a local level, and we haven’t heard yet from Bloomberg on these things because he’s controlled his media completely and hasn’t had to face hostile questioning in a national debate from reporters and fellow candidates.

Now, who knows? Maybe Bloomberg will turn out to be a natural on the debate stage. Maybe he’ll rein in his natural impatience and charm the TV audience. Anything is possible. But the smart money says Bloomberg has a lot more to lose than to gain on Wednesday night.