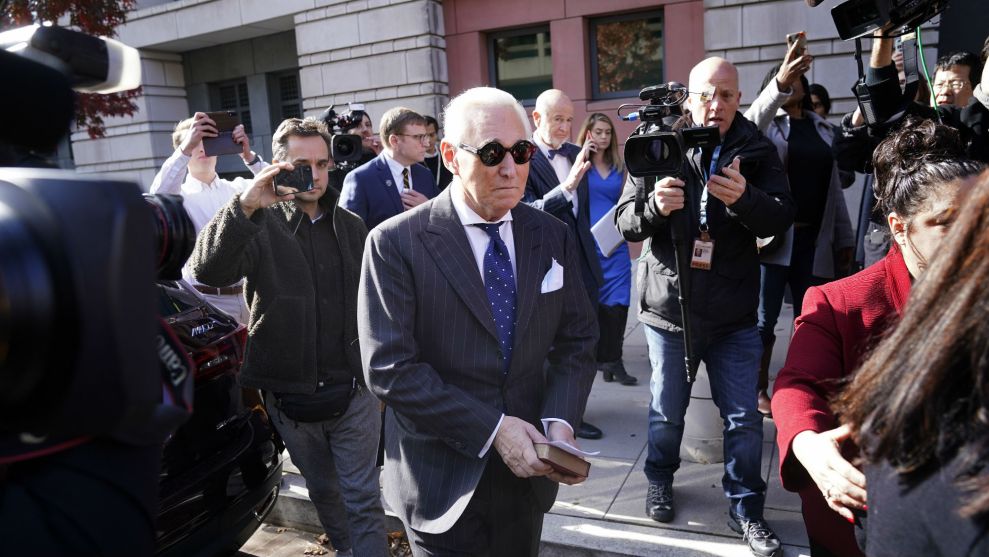 After originally asking for a 7-9 year sentence for presidential pal and longtime Republican ratfucker¹ Roger Stone, Attorney General Bill Barr intervened in the case and sent in a new prosecutor who recommended 3-4 years instead.² Today, judge Amy Berman Jackson sentenced Stone to . . . 3-4 years:

In a lengthy speech before imposing the penalty, Jackson seemed to take aim at Trump — saying Stone “was not prosecuted for standing up for the president; he was prosecuted for covering up for the president.” She also appeared to call out Attorney General William P. Barr, whose intervention to reduce career prosecutors’ sentencing recommendation she called “unprecedented.” But she said the politics surrounding the case had not influenced her final decision.

….Jackson made clear she thought Stone’s crimes were serious. She called his testimony “plainly false” and “a flat-out lie,” and said his misdirection “shut out important avenues” for Congress to investigate. She said Stone knew “it could reflect badly on president if someone learned” about his efforts to obtain damaging information about Hillary Clinton, who was then running against Trump to be president, from the anti-secrecy group WikiLeaks.

It’s not over, of course. Stone insists that he deserves a new trial and President Trump insists that Stone has been railroaded from the start. I’m going to go out on a limb and guess that none of this sticks and Stone is unable to earn an appeal either. So it’s 40 months in prison unless his friend in the Oval Office pardons him.

¹This is a term of art: “Stone’s specialty is being a ‘ratfucker’—a practitioner of dark arts avoided by most mainstream politicians and consultants,” Will Greenberg wrote for us a few years ago. Stone himself embraces the term “dirty trickster,” but “hasn’t been so eager to embrace another, more profane Nixon-era label with which he’s often tagged: ‘ratfucker,’ or a political operator who engages in roguish behind-the-scenes behavior to undermine rivals,” wrote Ben Zimmer in Politico last year. “He’s inexorably linked to the term, even if he doesn’t like it.”

²“Recommended” might be going too far. The revised sentencing memo was unusually mushy, so it might be more accurate to say that it “implied” a 3-4 year sentence.