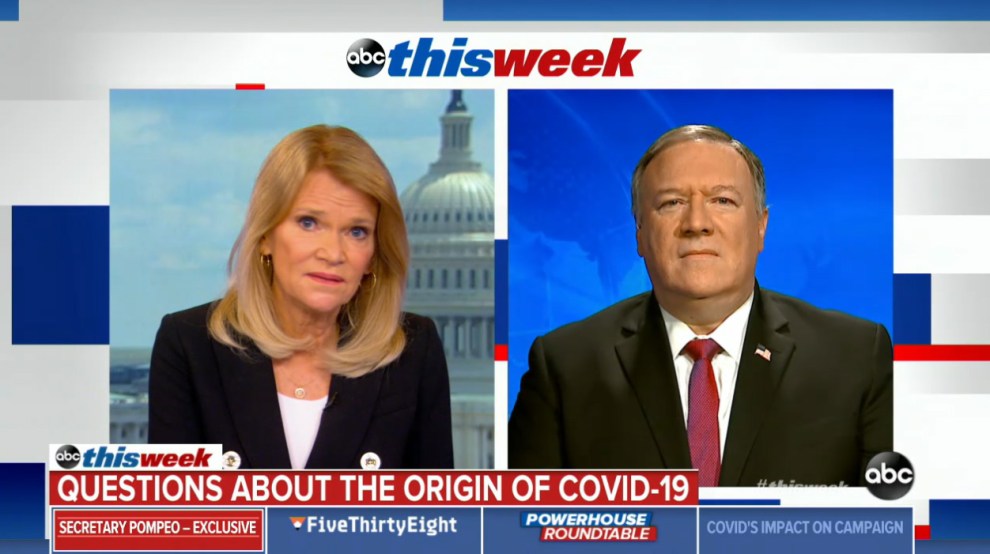 RADDATZ: And, Mr. Secretary, have you seen anything that gives you high confidence that it originated in that Wuhan lab?

POMPEO: Martha, there’s enormous evidence that that’s where this began. We’ve said from the beginning that this was a virus that originated in Wuhan, China. We took a lot of grief for that from the outset, but I think the whole world can see now.

Remember, China has a history of infecting the world, and they have a history of running substandard laboratories. These are not the first times that we’ve had a world exposed to viruses as a result of failures in a Chinese lab. And so, while the intelligence community continues to do its work, they should continue to do that and verify so that we are certain. I can tell you that there is a significant amount of evidence that this came from that laboratory in Wuhan.

Help me out here. The idea that the coronavirus might have escaped from the Wuhan Institute of Virology thanks to poor safety procedures has been circulating forever. And of course Donald Trump has blathered about it coming from the Wuhan lab too. But nobody pays any attention to him.

Now Pompeo is flat out saying that this is what happened. He’s right that viruses have previously escaped from labs both in China and elsewhere, but he’s not stopping there. He’s also claiming there’s “enormous evidence” that this is how the coronavirus originated. But this is not something to be lightly tossed around, even if the Trump administration is doing its best to reprise its greatest hits from 2016 and make China the punching bag for the 2020 campaign too. Here’s what CBS News reported a couple of days ago:

A senior U.S. intelligence official said Friday that the two scenarios being examined by the intelligence community about the origins of the novel coronavirus — via human contact with infected animals or as the result of a laboratory accident in Wuhan, China — are “both” currently supported by “evidence” that the community is continuing to evaluate. “Evidence of both scenarios exists,” said the official, who spoke on the condition of anonymity, given the sensitivity of the matter. The official declined to further characterize the evidence or its credibility, or to say whether either scenario was considered by the intelligence community to be more or less likely. The official did, however, say there was no indication of a “purposeful” release of the virus.

Various conservative outlets have reported the same thing, but with a twist:

A majority of the U.S. Intelligence Community’s 17 spy agencies believe the coronavirus likely originated with an accidental lab escape from a laboratory in Wuhan, China, a senior intelligence official told the Washington Examiner.

….The Daily Caller cited a senior intelligence official earlier Saturday who stated the majority view among U.S. spy agencies is that COVID-19 is natural and that it was accidentally leaked out of a Wuhan lab.

John Roberts of Fox News reported something similar. “There is agreement among most of the 17 Intelligence agencies that COVID-19 originated in the Wuhan lab. The source stressed that the release is believed to be a MISTAKE, and was not intentional,” Roberts tweeted on Saturday, adding, “Sources say not all 17 intelligence agencies agree that the lab was the source of the virus because there is not yet a definitive ‘smoking gun.’ But confidence is high among 70-75% of the agencies.”

So everyone agrees it’s possible the coronavirus accidentally escaped from the Wuhan lab, but all the conservative outlets appear to have access to a source in the intelligence community who says it was most likely a lab mistake.

Maybe so. But this sure sounds awfully similar to 2002, when intelligence officials were being bullied into supporting the Bush administration’s view that Iraq had weapons of mass destruction. Needless to say, that turned out not to be the case. Today, the intelligence community appears, if anything, to have been even more thoroughly politicized than it was after 9/11, and once again it’s telling conservatives what they want to hear.

But will we ever see any of the “enormous evidence” they claim to have? I guess I doubt it. That might ruin Trump’s reelection campaign, after all.