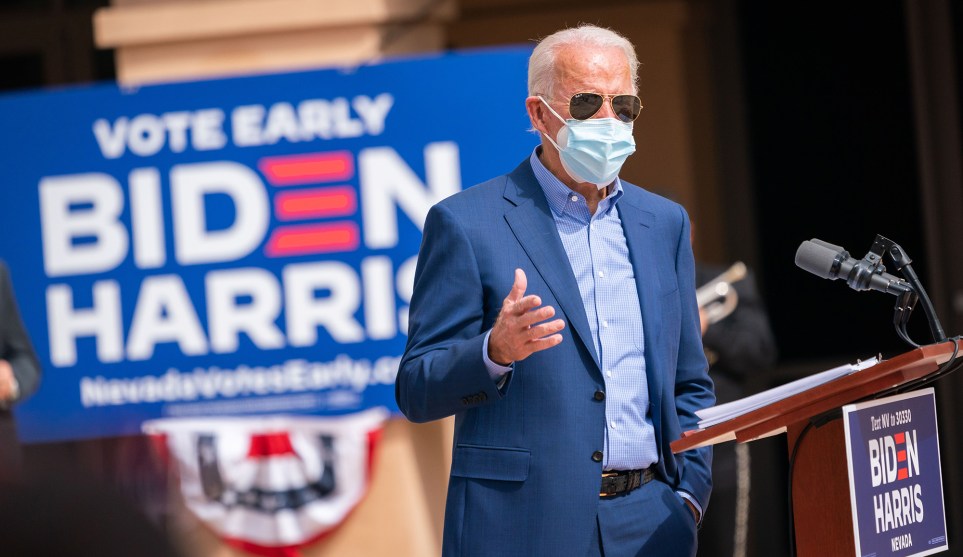 Joe Biden is the only candidate who is keenly aware that the middle 20 percent is the key to victory in November.Adam Schultz/Biden/ZUMA

Mike Davis is a Marxist and, as Jonny Coleman and Molly Lambert put it in an interview today, the author of several influential “proto-doomer urban theory classics.” But even taking that into account, this is an odd thing for Davis to say:

We need to face certain facts. It should be obvious—and I must say I was critical of Occupy Wall Street in this sense, right from the beginning, this idea of the 1 percent. In the elections, over the past hundred years where Democratic presidential candidates have had the largest margin of victory, still, the Republicans are able to count on 37 to 41 percent of the vote. Alf Landon in 1936, at 37 percent of the vote. Barry Goldwater got almost 39 percent of the vote. Trump’s popularity ratings are still about 40 percent. But you need to ask yourself—why this constant percentage in American political history? What does it say, particularly about the upper middle class, the local country club elites? Today the hedge funds and private equity people are a very large base in this country for conservative politics. This was true in the 1930s. It was true to some extent in the ’60s with the Goldwater–massive white resistance brigade. And it’s true today. So when we talk about bringing people together, we shouldn’t be talking about it in some vague populist sense, believing that there is this great basis of unity. It’s the 60 percent that we’re talking about and creating a class unity that is based on full recognition of structural racism and systemic discrimination.

Surely somebody must have a law named after them that explains this, or maybe it’s just so obvious that no one has ever bothered taking credit. But common sense dictates that in a two-party system—especially one like ours that practically demands two parties and no more—neither party can ever fall much below 40 percent support for long. That means permanent irrelevance, after all, and there are only two possible resolutions to that: either the party shrivels away and is replaced by another one or else the party changes its tune enough to start breaking 50 percent with some regularity. The Republican Party was born from the former and regained relevance after World War II via the latter. So the fact that neither the Republican nor Democratic parties has ever fallen below 40 percent support for more than a few years doesn’t say anything about our upper middle class or our local country club elites. It’s just an inevitable result of our political system.

Beyond that, of course, Davis makes the usual Marxist mistake of assuming that economic power and class conflict are everything. They are surely important, probably more important than any other single social dynamic, but they aren’t all-consuming, especially in a rich country like the United States. People will sometimes fight hard for economic equality when their incomes are truly immiserating, but once they start earning money on a livable scale—not lavish, just livable—it’s hard to motivate them to rebel over their lot in life. This is especially true when the liberal party (ahem) is unable to offer any plausible plan that would make more than a modest difference in their circumstances.

In other words, we need to focus most of our attention on the conflicted middle fifth of the American electorate. Which is probably what most of us have assumed all along. American politics is mostly a matter of gaining and losing the support of the middle 20 percent, and it has been for at least the past century.

Needless to say, this is the real limit on political extremism in this country, and also the real limit on radical change of any kind. Neither Marxists nor progressives (nor tea partiers, for that matter) want to hear that, but it’s as true today as it’s ever been. It follows almost geometrically from Davis’ remarks that if you want a durable, winning coalition, it’s that middle 20 percent you have to appeal to.