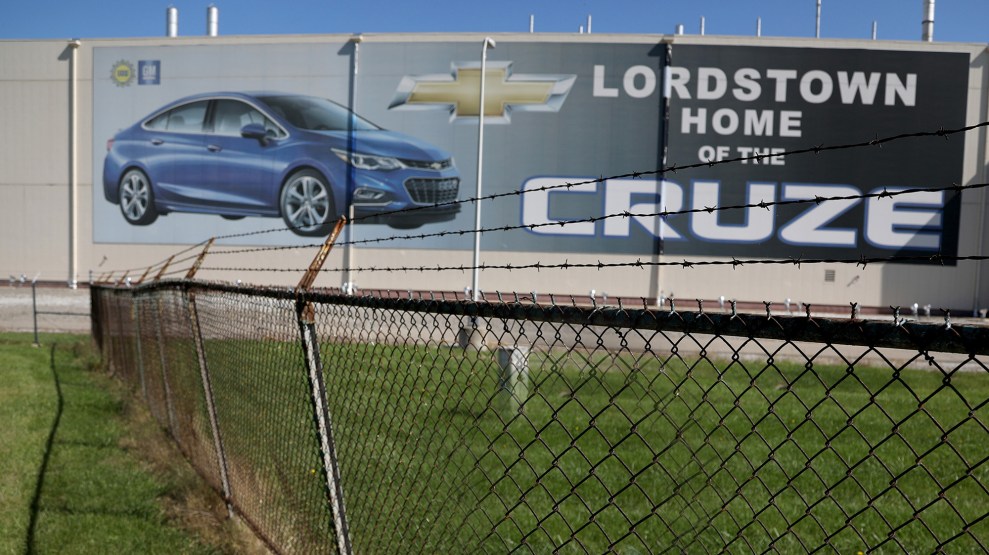 A couple of years ago General Motors announced that it was closing its assembly plant in Lordstown, Ohio. The Guardian has a nice piece today about how Donald Trump’s support is holding up there. There’s this:

In July 2017, Trump spoke in Youngstown and told the crowd that on his way in from the airport, he had seen the carcasses of too many factories and mills. He bemoaned Ohio’s loss of manufacturing jobs, but then boldly assured the crowd: “They’re all coming back!” He next told his audience, many of them workers worried about plant closings: “Don’t move! Don’t sell your house!”

Laid-off GM Lordstown workers still rail about that speech. Many moved to other cities to find work; many lost money selling their homes….Tammy Vennetti voted for Trump in 2016, largely because her older sister, a retired GM worker, kept urging her to….She is still fuming about his do-not-sell-your home remarks in Youngstown” “He promised that nobody was going to have to sell their homes. He said they [GM] were going to stay. That’s why I can’t vote for him this year.”

And this from Dave Green, a union official:

Soon after taking office, Trump relaxed fuel-efficiency standards for cars, and that, Green realized, could doom the plant, which made compact, fuel-efficient Chevy Cruzes. “He wasn’t in office long before he announced he would do away with the Cafe [Corporate Average Fuel Economy] standards,” Green said. “Auto manufacturers here had to build so many small cars to balance for all the SUV’s. When Cafe went away, Trump did the workers of Lordstown a huge disservice.” He doesn’t blame Trump for the plant closing, but says Trump accelerated GM’s decision, noting that GM much preferred building SUV’s and trucks to lower-profit small cars.

But there’s also this:

Mike Yakim, who worked as a team leader in Lordstown’s paint department, also backed Trump in 2016 and remains a big fan. “I had my reservations about him. I know he’s not a saint,” Yakim said. “But I had a good feeling about him. Trump seemed to be for the little guy.”

….“I saw what Biden has done to the economy, what he’s done in 47 years in office: his support of Nafta, that pretty much gutted the auto industry, and his rallying for the TPP [Trans-Pacific Partnership].” He asks why Biden didn’t do more to stop GM from closing its Wilmington plant in 2009 or stop Chrysler from shutting its plant there in 2008.

Anyway, it’s a good look at a cross section of working-class voters who are both for and against Trump. It’s worth a read.